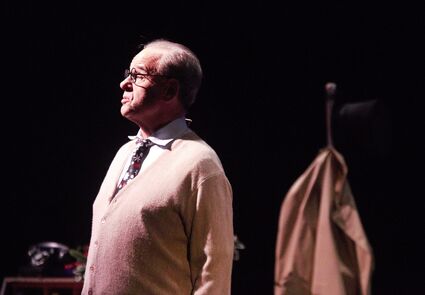 Lewis welcoming his US guests to his house for Christmas.

David Payne brought his one man show, "Christmas with CS Lewis" to the Shafter Ford Theater on Sunday, giving two performances, a matinee at 2:30p.m. and an evening performance at 6:30p.m.

Payne portrayed the acclaimed author who was the creator, among many others, of "The Lion, Witch, and the Wardrobe", a best selling childrens' book that has become a standard for essential reading.

Lewis in the red Christmas jacket given to him by his wife Joy.

Payne told the tale of an encounter between the author and fellow author JJ Tolkien, who was responsible for the Lord of the Rings trilogy, to a group of Americans who had spent a Christmas at his house. Tolkien, who was a faithful Christian, went to dinner with Lewis when Lewis's faith had been failing for years. As Payne told it, Lewis's mother died when he was nine years old and he was soon after sent off to boarding school. Lewis said, "I could not believe that there was a Christ Child and a God that would ignore all of my fervent prayers that I said to heal my mother." Lewis's crisis of faith continued into his young adult years and beyond, until that fateful encounter. Tolkien told Lewis that our God was not a myth, that He was real and true.

"Christmas began to mean what it did when I was a happy child, full of hope, faith and happiness," said Lewis.

Payne has been portraying Lewis for over 20 years. After answering a casting call, Payne has been wowing audiences with his mesmerizing display of Lewis's speech, mannerisms and wit.

Payne had the crowd listening intently, laughing, and touched all in the same show.

The performances were originally scheduled for 2021, but due to the pandemic, Payne's schedule was conflicted, and they had to be rescheduled. For many in the audience, the wait was apparently well worth it.