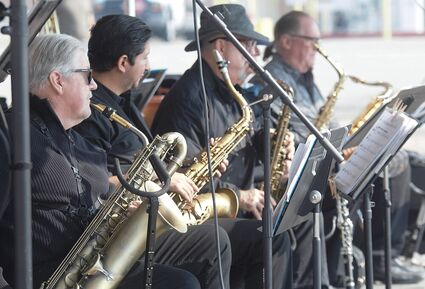 The Shafter Big Band entertained with a great mix of songs.

Minter Field Air Museum held their annual Wings n Wheels event on Saturday, drawing thousands to the airport, getting a look at an array of aircraft, car, trucks, and military vehicles on the site. President Ronald Pierce said that this year was a success, the second year it has been held since the pandemic forced the group to cancel the major fundraiser of the year for two years.

"It was a challenging time but we had great support from the community and we are back bigger and better," said Pierce.

The event featured over 50 airplanes, from antique aircraft, vintage military planes, and sleek, modern planes. The Red Baron plane that is stationed at Minter Field was on display, a vintage plane that was used during the World War II campaign.

They also had their LOACH helicopter on display, giving the kids a chance to climb in the cockpit for a picture.

For foodies, there was plenty to choose from, including hot dogs, hamburgers, fair food, as well as authentic Korean BBQ, which was a very popular destination, selling an amazing amount of Korean corndogs, among their varied fare.

The Shafter Big Band entertained the crowd with a great mix of oldies and standards. The band is made up of local residents who enjoy getting together to play good music.

Vendors were aplenty, with everything from informational booths including the Kern County Honor Flight, the Kern County Veterans Association, as well as Wounded Warriors. 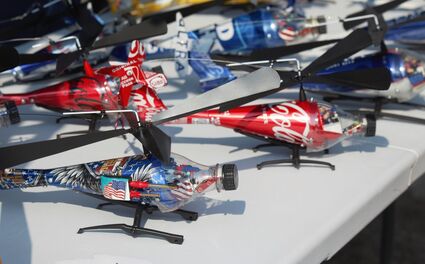 These airplanes are made of aluminum cans.

There were a variety of vendors selling pet treats and toys, clothing, jewelry, hats and one both that was selling homemade airplanes made out of aluminum cans.

Av Nation Magazine had a booth with a pair of sisters manning it. The Gutierrez sisters, Lucy and Cayenne were featured a couple of years ago in the magazine. They were building their own airplane and training to be pilots. In 2022,Lucy decided to put plane building aside for awhile and concentrate on her love of ballet. This year, AviNation magazine reached out to the ballet company and had both sisters at the event, with Cayenne talking about the process of building the plane and Lucy demonstrating her ballet talents.

Pierce said that with the event now in the rearview mirror, it is time to start planning for next year, which they intend to make even bigger and better.