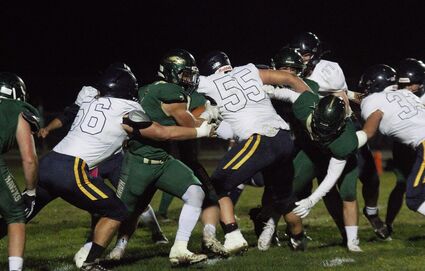 The Generals' defense stop the Hawks from a first down.

The Shafter High Generals went to Madera on Thursday night and stunned the #1 seeded Liberty-Madera Hawks 14-13 in their CIF Division IV quarterfinal. Liberty had entered the game undefeated at 11-0, with just one game as close as seven points in their season.

The first half of the game was two quarters of would haves and should haves, with the Generals having several opportunities to put points on the board, but were always a bit short. Two pass plays were apparent touchdowns with dropped passes, and several penalties, as well as a lost fumble.

The Shafter High defense played their most complete game of the season with series of drives that forced Liberty into punts, keeping the Generals down by just one score at the end of the first half.

In the second half, the Shafter High offense moved the ball effectively the entire half, with them finally breaking through midway through the fourth quarter, with quarterback Ezekiel Osborne connecting with Jesus Figueroa on a long touchdown pass, tying the score at 7-7.

With Liberty looking to retake the lead, the General got the ball back for the Shafter offense with just over five minutes to go in the game. But, the Generals' offense gave the ball back with a fumble, giving the Hawks a first down deep in General territory. The Hawks took the lead back with a minute left in the game, going up 13-7. The PAT was no good. It turned out that a minute was more than enough time for the Generals to answer back as Osborne connected with Jesus Figueroa on a 67 yard touchdown pass. After a penalty, then Liberty trying to ice the kicker with a timeout, Ernesto Guerrero kicked the extra point through, giving the Generals a 14-13 lead.

The Hawks tried a couple of pass plays and with seven seconds to go, Maryon Sloan intercepted a pass, giving the Generals the victory. 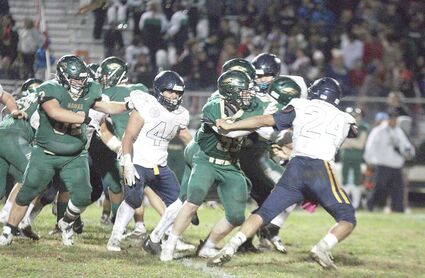 Ramon-Amador powers for a first down.

Coach Jerald Pierucci and his staff developed a game plan that challenged Liberty with a great balance on offense, mixing powerful running by Christopher Espinoza and Rafael Ramon-Amador, with a slew of receivers, including Jesus Figueroa, Maryon Sloan, Jesus Vegas and Jesse Bernal. Sean Lozano and his defensive staff kept a powerful Hawk offense on their heels all night. The defense kept the Hawks to their lowest point total of the season.

Enough cannot be said about the performance of the Shafter High lines on both sides of the ball. The offensive line cleared paths for Espinoza and Ramon-Amador and the defensive line fought off blocks, plugging holes denying the Hawks' backs any running room. The defensive also kept the pressure on the Hawks' quarterback all night.

With the victory, the Generals will be returning to Madera to play #4 seeded Matilda Torres High School on Friday night. Kick-off is set for 7 p.m. Take the trip up north to support your Shafter Generals in their quest for a Valley Title.