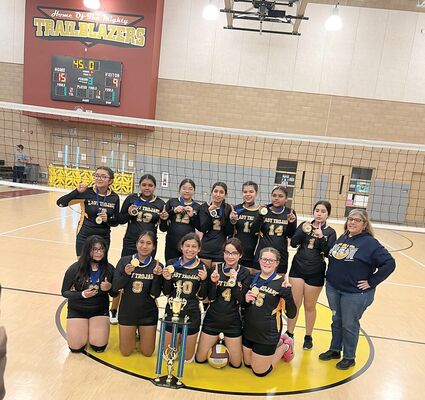 The Richland Junior High Girls' 8th Grade Volleyball team finished an undefeated season recently as they went 18-0 for the season.

Coached by Rosie Villagomez, the team, made up of 12 girls, played several schools from the area, including teams from Wasco, McFarland, and several Delano schools. The squad, according to parent Analisa Garcia, was made up of girls who had played their first volleyball last year when they competed on the 7th grade team. "There are two girls, sisters, who play for a travel team, but other than that, the girls had just started playing volleyball last year."

After going 11-0 during the regular season, the team went to Pioneer Middle School in Delano to compete in the season-ending tournament. Richland won their first two games of the tournament handily, setting up a match-up with the Wonderful Academy. Wonderful Academy went undefeated during the regular season until they played Richland, losing their only games of the year.

Aliyah Escalera serves up an ace for the Trojans.

In the rematch in the final championship game at the tournament, Richland took the first game of the best of three matchup, with Wonderful taking the second set. Richland won the third game 15-9 to take the title.

The experience was a great one for the girls. Aliyah Escalera said that she plays both basketball and volleyball and that the volleyball helps her improve in her first love, basketball. "It helps with my communication skills because you have to be communicating in volleyball all the time," said Escalera. She also said that it helps improve her teamwork skills. Several of the girls will be looking forward to competing for the Lady Generals when they start their high school careers next year. With this amount of talent, the future of the Shafter High teams look pretty bright.