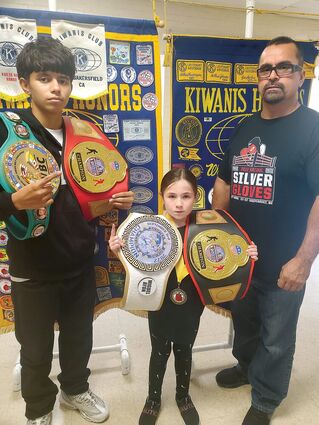 The Shafter Kiwanis Club hosted Coach Mike Ayon of the Shafter Boxing Club and a couple of his boxers at their regular meeting last week.

Ayon and his group have put the city of Shafter on the boxing map for over a decade, with numerous regional, state and national champions.

On Wednesday, "Fast Eddie" Rodriguez and Jerikah Wilson Argueta were on hand to give the members a boxing demonstration, as well as answer a questions about their sport and their club.

Both Eddie and Jerikah are great competitors and have champion belts on their boxing resumes. Eddie and Jerikah said that they love the sport and have a good time competing for the club. The Shafter Kiwanis Club presented the club with a check to help cover travel expenses for upcoming competitions.

The club began with a group of kids training at Ayon's house in his garage and backyard. The group grew, and resulted in a couple of regional champions, eventually adding national champions into the mix. They now have over 10 national titles in the group, and many other championship belts for the members of the club.

They also now have a training facility on Lerdo Highway that enables them to work out and compete.