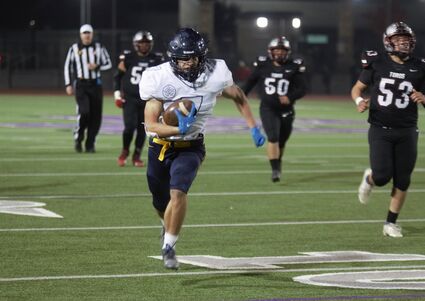 Jesus Figueroa runs for a touchdown.

The Shafter High Generals are bound for the Valley Title Division IV game with an overtime win over the Matilda Torres Toros on Friday night, 42-41. The Shafter defense, which had trouble stopping the Toros in the second half, came up big and stopped Torres on a two-point conversion in overtime, giving the Generals the win.

The No. 8 seeded Generals upset the top seed, Liberty Madera, last week to get a place in the semifinals.

In the first half of Friday's game, Shafter used a ball-control offense to take the lead early in the second quarter. The Toros answered back on their next possession, tying the score at 7-7. The Generals took the lead back with just a couple of minutes left in the first half on a 24-yard run by Christopher Espinoza, taking a 24-7 lead into the locker room.

In the second half, it was a heavyweight bout, with both teams trading punches, scoring on nearly every possession. The Generals took a 21-7 lead on a touchdown pass from freshman quarterback Ezekiel Osborn to Jesus Figueroa. Torres cut the lead to 21-14 in the next series of plays. But, Shafter took the ensuing kickoff back for a touchdown on an 85-yard run by Figueroa, who ended the game with almost 300 total yards on offense. "Figueroa has taken a big load and helped carry this team the past couple of weeks," said Coach Jerald Pierucci.

The Shafter High defense made just one stop in the second half of the game, but it was the biggest one. With time running down in regulation, Torres was looking to score on the Generals again. But, the Generals' defense held Torres without a score as time ran out, forcing the overtime session. 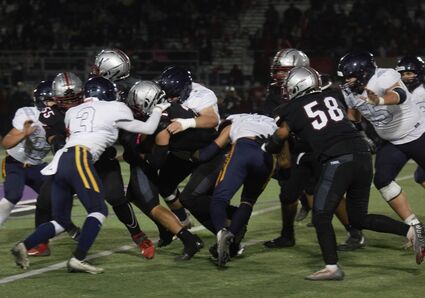 The Shafter defense stops the Toros on fourth down.

In overtime, each team takes the ball at the 25-yard line and tries to score. If they do, the opposing team gets a chance to answer back. If they can't score, the game is over. Shafter faced a third down and 18 in their overtime possession, and Osborn hooked up with Figueroa again to give them a score. The Toros took the ball and scored on the first play of their overtime possession. But, they elected to go for the two-point conversion to win the game. The Toros quarterback completed the pass, but the Generals' defense stopped the receiver short of the goal line, preserving the victory.

With the win, the Generals will play for the Valley title in Caruthers, against the Caruthers Blue Raiders. The game is on Friday night, with the kickoff at 7 p.m. For the first time in a few years, the Generals will be practicing on Thanksgiving, a goal for all area teams with big dreams.