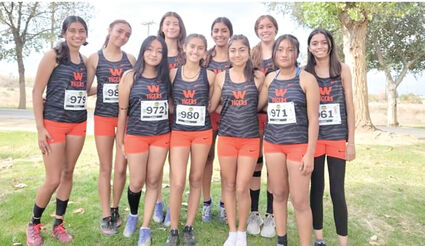 The Wasco High School varsity girls cross country team has had an outstanding year, winning back-to-back South Sequoia League championships. They qualified for the Valley Championship, where they again took the runner-up award, which made them eligible for the State Championship.

Omar Garcia is one of three head coaches, along with Rafael Gonzalez and Leo Sanchez. Garcia has coached cross country since 2016 and has been a physical education teacher at WHS since 2015.

"I've been coaching since I was 18 years old. I have extensive experience in track and field and cross country. I was also a runner for WHS," Garcia said.

He said winning the SSL two years in a row was significant.

"We haven't had this amount of success since 1997. It shows that our community is backing all their student-athletes and making them proud to represent their high school."

Making it to the Valley Championship was also a big accomplishment.

"As the program adapts and qualifies for championships more, they become accustomed to being successful, and that turns into professional success in the form of confidence and one's own ability to perform under pressure," Garcia said.

Regarding the next competition, he added, "For me as a coach, them making it to state is a big win because historically it's only the fifth time that girls cross country team has made it to the State Championship."

Cross country is a distance sport that measures a runner's stamina along a 5K race.

Of these 12, only seven may represent the school.

Garcia said for the girls to excel, they need the right attitude and mindset.

"And able to be coachable."

He added that the sport of cross country is unique.

"It's not for everyone. Not everyone can do it or wrap their mind around that they are running 500-600 miles in a season during practice just for a 5K race."

Garcia believes that to be a good runner, you must work hard and push your body to a limit you don't know yet.

"These girls stand out because they are committed, focused and have come together at the right time as a family because cross country is a family sport."

Cross country is a state of mind.

"We have to put the mind over the matter, ignoring the pain and ignoring the body when it tells us we are tired," Garica said. "That teaches them a lot about themselves so that they can push through that."

It is a team sport.

"The girls depend on one another. They know they can lean on their sister. When one girl has a bad day, they can count on each other to pick up the slack and still end up with high points to accomplish their goal."

The girls put in much effort to make it to the top.

"They practiced five days a week for almost two hours running from 4 to 6 miles each time. They also do strength conditioning," Garcia said.

Team captain Priscella Raya said of their preparation and the upcoming State Championship, "I am very excited. We worked for it the entire season, and I'm glad our hard work paid off."

She credited coach Garcia for their achievements and expressed that he is very supportive.

"He always pushes us to do our best. He knows we have a lot of potential and tries to help us reach our full potential," Raya said.

She added, "He is a great person, easy to talk to and makes our bonds with each other stronger."

Raya said she has developed special connections with the other girls.

"We are very close to each other, and we can come to each other about anything. We all push each other so we can all do our best. They are a great group of girls, and I love them."

She continued that what she loves most about the sport is that she can be herself with her team.

"I don't have to hide who I am; it is an amazing way to release stress. The sport has brought me great friends I will have for a long time."

The State Championship will occur on Saturday, Nov. 26, in Fresno.

"It will be the culmination of six months of hard work. It's amazing to get here because we are a small community, and small communities don't often make it to state," Garcia said.

The team motto is "small but mighty."

"Great things are soon to come with hard work and dedication. I am really proud of who they are becoming and what type of leaders they will be."