Generals come back for first Valley title in 67 years 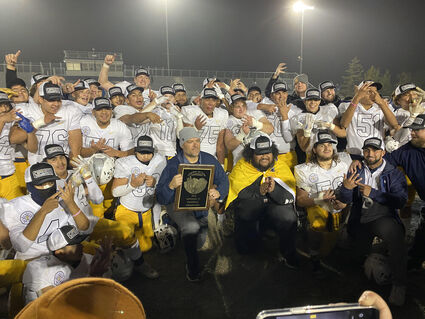 The Shafter High Generals, for the first time since 1955, are Valley Champs in football. The Generals pulled one more victory out in their incredible playoff run by beating Caruthers, 41-35, on Friday night.

Freshman quarterback Ezekiel Osborn had another outstanding game, going 22-37 for 372 yards in passing, with three touchdowns.

Maryon Sloan, just one of a slew of weapons for Osborn, led the corps of receivers with 199 yards with 10 receptions. This included a 65-yard touchdown pass play that tied the score at 35-35.

The first half saw the teams trading scores to begin the game. Shafter went ahead 14-7 in the second quarter on a 1-yard touchdown run by Koa Rhodes, who returned after being out for three weeks with a knee injury.

Caruthers tied the score midway through the second quarter. The Blue Raiders, coming into the game as the third seed, took a 21-14 lead on a 52-yard pass play, ending the half.

Caruthers wasted no time in the second half, scoring on their first possession of the third quarter with another long pass play, making the score 28-14. Caruthers seemingly put the game away on Shafter's next possession, taking an interception of Osborn into the endzone for a pick-6, making the score 35-14.

But, these Generals, although one of the youngest varsity teams in school history, showed a strength that belies that youth. Coach Jerald Pierucci said that he credits the unity of this team, the chemistry between the players, for their ability to pull close games out throughout the season. "These guys really like each other. They hang out, on and off the field. This unity is a big reason for their success."

This strength showed as the Generals came back to cut the score to 35-21 on their next possession, with Osborn connecting with Jesse Bernal on a 10-yard touchdown play. The Shafter defense, which had trouble earlier in the game stopping the Blue Raiders, put on a show for the remainder of the game, thwarting drive after drive from the Caruthers offense.

After stopping the Blue Raiders, Osborn hooked up with Maryon Sloan on a 63 touchdown pass, making the score 35-28. After another outstanding series by the Generals' defense, forcing a punt from Caruthers, Rhodes scored on a short touchdown run, tying the score at 35-35. 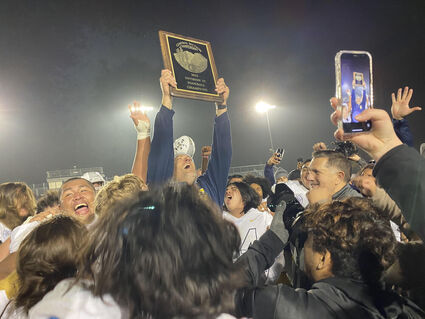 With Caruthers looking to mount a drive, the Shafter defense came up big once again, as they recovered an errant snap in the end zone, stopping the drive. The Generals took the lead after Osborn connected with Sloan on a long pass play, giving the Generals the ball deep in Blue Raider territory. The drive resulted in a 25-yard field goal by Ernesto Guererro, making the score 38-35. Guerrero added a 20-yard field goal, widening the lead to 41-35 with a minute left in the game. The Generals' defense finished the job, denying the Caruthers' offense again, giving the ball back to the Shafter offense, who were able to run out the clock, giving the Generals their first Valley championship in 55 years.

Rightt after the game, Pierruci said, "So many teams would have quit after getting down by 21, but you guys came back, you didn't give up. I am proud of you guys."

Fans packed the Shafter side, with standing room only. "This was one of the best games I've ever watched," said fan Emelio Segura. "I played over 25 years ago, and I never thought that I would be able to see us playing for a Valley title. This is awesome!"

It was an outstanding performance on both sides of the ball for the Generals, with the defense coming up big when it counted, and an offense that racked up 670 total yards. The Generals will now compete in the Regional Playoffs, with a state title on the line for the last two teams standing.