By jamie
The Shafter Press 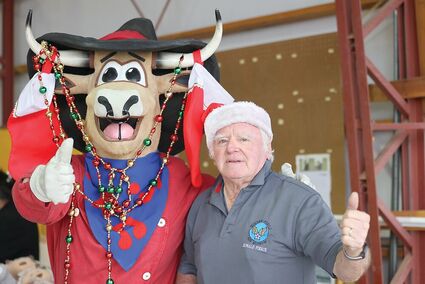 Santa Claus flew into Minter Field in Shafter on Saturday, touching down in an airplane, giving his reindeer a rest before their big night.

Hundreds of children and parents were on hand awaiting his arrival. They spent time looking at the antique airplanes that the Minter Field Air Museum has on display as they waited. They were also entertained by an appearance of KC the Bull from the Kern County Fair. KC visited with the children and took pictures with them. 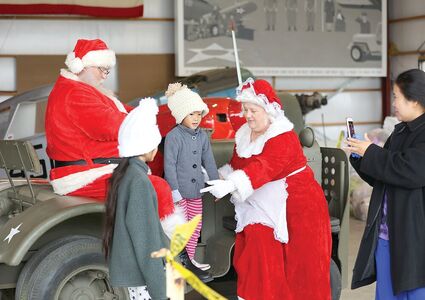 Santa and Mrs. Claus preparing to take pictures with all of the kids.

When Santa touched down, a big roar came from the crowd. Mrs. Claus joined Santa and greeted the kids at the event.

Shafter's Apple Market provided cookies and juice for the attendees. With the kids lined up, Santa and Mrs. Claus took pictures with the kids, getting their Christmas wishlists before they left. All of the children received a stuffed animal, donated by Petsmart of Bakersfield.

Museum Chairman of the Board Ronald Pierce said that they were happy with the crowd. "We love to hold this event, giving the kids a chance to get a picture with Santa and giving them a stuffed animal."

The attendees visited with Santa and looked around at the different exhibits at the museum. "This place is just awesome," said Robert Langdon, who was at the event with his two grandchildren." I haven't been here in years, they have so much more stuff than before."