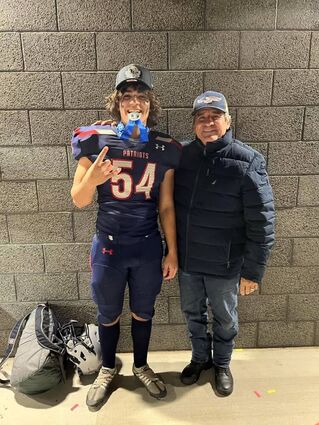 With the Shafter Generals in the news with their remarkable run to the State Championship game, there was also another Kern County football team in the hunt.

Liberty High School in Bakersfield made an outstanding run in the playoffs, including a rematch with Clovis-Buchanan, a team that beat them during the regular season in a game that was called in the fourth quarter because of lightning. 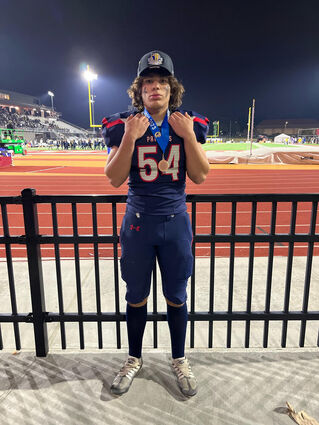 Jude Maldonado with his medal after the game.

A Shafter youth, Matthew Jude Maldonado, was a part of the Liberty team taking the State title as a player for the Patriots, who beat Pittsburg High School on Saturday night, giving Liberty their first-ever state championship.

Maldonado, an underclassman, had a successful season on the Patriots' junior varsity team as a part of the Liberty defense. Maldonado played inside linebacker and running back for the JV team that had an outstanding season. Maldonado was so productive on the team that when playoff time came around, he was called up to the varsity squad.

Maldonado took advantage of the chance and helped the Patriots reel off wins against San Joaquin Memorial in the Valley Championship game, a 41-28 victory in the Regional Championship game over Yorba Linda, and the title game against Pittsburg.