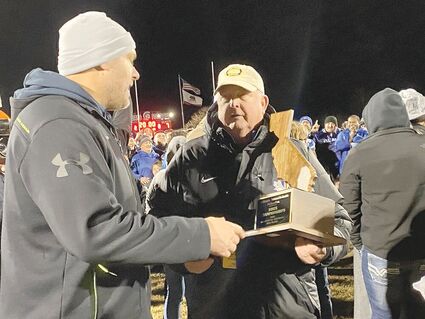 Coach Jerald Pierucci had a few words with CIF representative after the game.

The Shafter High Generals football team concluded an amazing season on Dec. 10 with a hard-fought State Championship game performance, showing the grit and determination that this team had played with the entire playoff run.

The team became the school's first Valley Champion in football since 1955 and became Shafter's first Regional Champion, on their way to the State Division 5A runner-up.

Coach Jerald Pierucci recently commented on the Generals' outstanding season, as well as following up his post-game comments after the State Championship game, which was played on a field that was a muddy mess and didn't allow the people in attendance and watching on television to see the best of both teams in this title game.

After the game, Pierucci said, "It is sad that the game had to be played in conditions like this. With the Division I and II, and Open Division, being played on a neutral field, in a nice stadium and on turf, it is unacceptable to have a state championship decided like this. Shame on you."

The comments went viral and discussion spread throughout the football community on the process of deciding state champions.

Several calls from The Shafter Press to the California Interscholastic Federation – the sports governing organization for high schools – for comment went unanswered. Coach Pierucci said that he has not received any response either, but said that his words, he believes, have been heard. "I believe that this will bring about a change that every small school deserves – that being the same experience as the big schools get."

This does not mar their amazing season, and the exciting journey that the Generals took the community on this year.

"This year has been a perfect season for the team that would become known as the Cardiac Kids," he said. "Having it any other way would not have made it as special as it was."

He also commented that he was so proud of this year's team for several reasons, one being the growth and skill set and overall mindset of the team. "It was phenomenal. The light switch just turned on during the Wasco game. They became a team that played sporadically well to a team that played a very complementary kind of football, meaning that the defense rose up when the offense was struggling and visa versa."

He added that another factor that was not as pivotal during the regular season but was a huge part of the championships was the special teams' play. "If we had our kicker in 2016, we would have had another Section title," he said.

Add to that was the belief that the kids had in each other. "The faith that was shown by our Generals was exceptional, they never believed a game was out of reach," he said.

Pierucci believed that a major reason for their success was the physicality that the team played with. "This to me is a big testament to our offseason and in-season weight lifting program. The kids sold out to it, and it showed on the field in our physical play."

Finally, he said that he is very proud of his coaching staff. In the latter part of the season, Pierucci decided to spend the game upstairs in the press box, leaving on-field duties to his assistant coaches. "When I decided to go into the box to call the offense, a lot of them had to step outside their comfort level and do jobs that I had usually carried. This freed me up to be a better offensive coordinator and in turn help our young team have success. But I would not have had the confidence to do this major move if I didn't have the assistance coaches that I have."