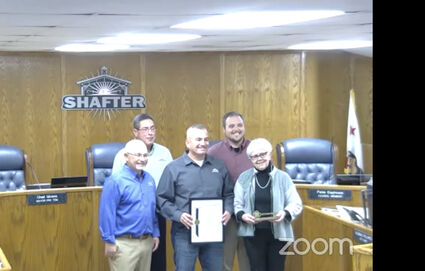 A proclamation was given to Cesar Lopez.

The Shafter City Council certified the Nov. 8, 2022, election, welcoming the two candidates who won the two open seats that were available. Mayor Cathy Prout and Gustavo Olvera were the two top vote-getters in the election, beating out incumbent Cesar Lopez and candidate Rafael Zamudio.

And Shafter has a new mayor for at least the next two year. After minimal discussion, veteran Councilmember Chad Givens was selected to lead the city.

Resolution 2899 was approved, certifying the results of the General Election that was held on Tuesday November 8, 2022. Cathy Prout had 1,712 votes, with Gustavo Olvera receiving 1,223 votes. Cesar Lopez had 1,182 votes and Rafael Zamudio received 879 votes.

Cathy Prout and Gustavo Olvera take the oath of office.

Cesar Lopez received a proclamation from the City of Shafter for his years of service on the council, as well as his service to the community of Shafter as a director and coach of the Shafter Brawlers softball team. In part, the proclamation said, "Cesar has worked diligently on increasing the awareness of and establishing the importance of Shafter's economic development, aesthetic development, and Shafter's impact within the county, state, country and world, as well as making the education of children and adults a high priority".

The council then discussed the selection of a mayor. Councilmember Alvarado nominated Givens and. Councilmember Espinoza nominated Prout, commenting that he thought that the city needed experience at this time (Prout has been a councilmember and mayor many times). He also said that the council will be facing the renewal of its rail spur contracts, and with Givens working for the owner of the land the spur sits on, the Wonderful Company, there would be a possibility that there might be a conflict requiring him to recuse himself from anything on that issue. After discussion, there was a unanimous vote to make Givens mayor. Prout was then chosen as mayor pro-tem.