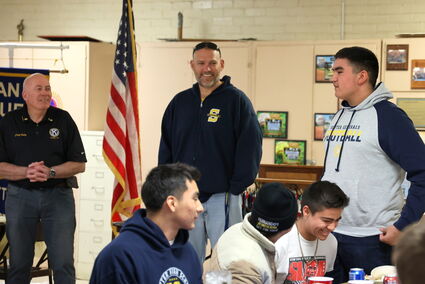 Some of the players spoke about their experiences during the season.

The Shafter Kiwanis Club hosted the Shafter Generals football team and its coaches at a recent meeting. The team was treated to lunch and the players, in turn, shared some of their experiences throughout the season. 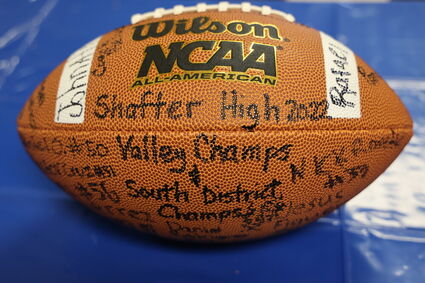 Signed football was presented to the Kiwanis Club/

Coach Jerald Pierucci talked to the members about the season, such as what it took for the players to prepare for the season and how they came together as a team to make that amazing run in the playoffs. The team also presented the club with a football, which had written Valley Champs and Southern Regional Champs on it, as well as having the signatures of the players on it, as well as coaches.

This Generals squad was not the best team on paper, with four losses in league play, even though most of the losses were by less than three points. Pierucci explained that the team really came together at the Wasco game, with the team working as a complete unit. During the entire playoffs, the Generals played a team style of football that is found in championship teams, with each phase of the game lifting up the other parts of the game. If the offense is not at the top of their game, the defense would pick up the slack and vice versa.

The Shafter Kiwanis Club is known for its teamwork as well, with the members working individually and together to benefit the community of Shafter, especially the youth of Shafter.