Reviewng the first half of 2022 in Shafter 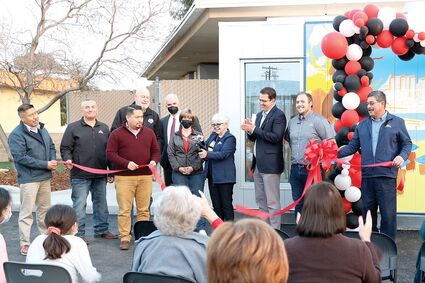 Ribbon cutting ceremony for the reopening of the Shafter Library.

The city of Shafter had an eventful year this past 2022, full of positive accomplishments, as well as some losses and challenges. There were a first for Shafter High School, with its very first football team that played for a State Championship. Shafter also saw a new member join the City Council, while also keeping an old friend, with Mayor Cathy Prout retaining her seat on the council.

Here's a sampling of the highs and the lows that were the year of 2022. Next week will cover the second half..

January 2022 started out on a positive note when the Shafter City Council approved an assessment to be done regarding the Shafter Aquatic Center, which has been need of repairs for over a year. The pool had been shut down, with the contract not being renewed with the City of Shafter and the Shafter Recreation and Parks District. The SRPD did not want to renew the lease agreement, which had the District in charge of operating the center. With the termination of the agreement, it was unclear what would happen with the center and its swimming pool.

January also saw the arrest of former Shafter code enforcement officer, Matt Maldonado. Maldonado was charged with five counts of annoying/molesting of a minor. Maldonado was arrested after an investigation was conducted after Eli Espericueta turned over video of a practice session that took place at Espericueta's residence in his garage. It was alleged that Maldonado touched two female wrestlers inappropriately during the session. It was reported that Maldonado had been investigated a few years ago when he held the same position in the city of Wasco. The investigation was confirmed by Sergeant Shin of the Wasco substation of the Kern County Sheriff's Office. No charges were ever filed in that investigation.

At the end of January, the city of Shafter held a ribbon-cutting ceremony celebrating the reopening of the library. The Kern County Library system had decided not to reopen the Shafter Branch of the Kern County Library, leaving the residents of Shafter without an opportunity to use a library in town, the nearest library being in the city of Wasco. The residents of Shafter, along with the Shafter City Council, and a partnership with Bakersfield College, the library reopened as the Shafter Municipal Library. The library is no longer affiliated with the County's library system. With the agreement with Bakersfield College, the college will man the library with staff, and will also hold a few classes in the space as well. This partnership gives the Shafter Library new life, with residents young and old able to utilize the amazing new library.

February saw the first of many hearings and workshops regarding the new Trash Collection system to hit the city of Shafter, doing away with alley service and have all residents on a Three-Cart system, with residents responsible for bringing their carts to the curb on collection days. This caused an uproar within the community, with a lot of people saying that they are not able to bring carts out to the curb, and also stating that when they purchased their homes, it was under the assumption that trash collection would take place in the alleys. Workshops by American Refuse's Lynnda Martin explained the changes to residents and said that a new state law required all residents to be on the Three Cart system beginning in 2023.

Also in February, the Shafter Boxing Club saw one of its members capture a national title in his weight division. "Fast Eddie" Rodriguez won his eighth title in boxing, becoming the winningest boxer in Shafter Boxing Club history. Rodriguez competed in the 15/16 Silver Gloves championships, held in Independence, Mo. Rodriguez has helped the city of Shafter grow a powerhouse, with much bigger clubs taking notice of the small city of Shafter and its winning boxers. This club has grown under the tutelage of Mike Ayon and his staff of volunteers. Ayon began the club over 10 years ago, teaching kids in his backyard and his garage, giving them something to do to keep them fit and off of the streets. This program has helped the city and its kids put Shafter on the boxing world map.

February also saw the tenure of Wasco Tribune Editor Toni DeRosa come to an end. DeRosa had worked for the newspaper as an editor in Arvin when Reed Publications had the papers, and moved to Wasco to work that position for the Wasco Tribune for the Shafter-Wasco Publishing Co.

Derosa stepped down from her post to spend more time with family and enjoy her retirement years, thankful for the wonderful times that she had had with her newspaper family.

The All Seated in a Barn organization, a non-profit organization that rescues horses and other equines, relocated to Shafter, bringing its service to the community with special events, animal adoptions and special programs introducing the horses and donkeys to kids and adults, making it possible for people to learn about the benefits of spending time with these gentle giants. Headed up by Tahlia Fischer, the company hosts weddings, arranges adoptions, fundraising events, and a special therapy program.

In March, the city of Shafter received wonderful news with the approval for a grant worth $5 million that will be used to do improvements to the Shafter Aquatic Center. The pool has been closed for two years, with it in dire need of resurfacing, improvements made to the landscaping, as well as concessions and changing rooms. The Shafter High School swimming teams have not had a home pool since the closure of the pool at the center. This would be a real boost to the program with the improvements made to the center.

This was also the month in which the Ford Theater hosted the smash hit Newsies, which was produced by the Shafter Young Adults Theater. The show played to packed houses, with the group showcasing the talent that is found in the city of Shafter. The play depicts the newspaper business in the early 20th century, with a rise in prices in the newspaper leading the newsboys who sell the papers to strike. The play had an amazing cast that makes it apparent that programs such as these benefit children and young adults who have a passion for the fine arts.

Also in March, the Shafter High seniors were able to return to in-person classes, with the restrictions being lifted that hindered students' ability to get an education with in-person instruction. The city also celebrated the dedication of the expansion that took place at the Shafter Learning Center and Library. The Center now has a courtyard area, as well as additional classrooms and a beautiful mural that was done by local artist Lorena Castillo. The expansion was made possible by GAF Materials, a company that has been instrumental in the growth of the city of Shafter's educational buildings and materials.

April saw a new Shafter's Distinguished Young Woman being named. Faith Bazaldua, who was sponsored by San Joaquin Roofing, was given the title, along with over $1,200 in scholarship money. Bazaldua won the Self Expression phase of the contest, along with the grand prize. She also won the opportunity to represent Shafter in the State competition.

Of course, April is also the month that we celebrate the Easter holiday. This year saw the return of the annual Sonrise Easter service that is held at Mannel Park at sunrise. A large crowd gathered to watch the sun rise over the trees and sings hymns and hear a wonderful message of hope and faith.

May saw the return of one of the most popular events annually in Shafter. The Shafter Cinco de Mayo festival returned to the streets of Shafter, complete with a big parade, as well as special events at Mannel Park. The festival included great music, wonderful food, and numerous vendors that sold everything from clothing, jewelry and house décor, to beauty products and homemade products. Manuel Garcia was the Grand Marshal for the festivities, with the rich history of Shafter on display.

"Fast Eddie" Rodriguez won his eighth title in boxing as part of the Shafter Boxing Club.

The Shafter High Drama Club had performances of the Broadway hit "The Drowsy Chaperone" at the Fred Starrh Performing Arts Center, with the cast giving spot-on performances for the packed audiences. David Bloehmof starred in the production as Robert Martin, the oil baron who was engaged to the famous Janet Vandergraff, who decided to give up the stage to marry Martin. Comedy, drama, and wackiness ensues as forces were at work against the happy couple getting married. It was a smash hit for school and the audience. May also saw a fire in which a potato warehouse across from Generals Headquarters burned down. The cause of the fire is believed to be arson, possibly by a vagrant or squatter. This was the fifth fire in the city of Shafter in the last few months, with a couple of the fires with causes unknown. An investigation was done but no arrests were made in the case.

June saw the graduating class of 2022 walking across the stage at Shafter High, welcoming the Generals back, even with the renovations being done on the home stadium. Principal Russell Shipley welcomed one of the largest graduating classes in the history of Shafter High School.

In June, there was also a verdict in the case of Steven Flores Garza, who was convicted of second-degree murder. Garza was eventually sentenced to 35 years to life in prison for the crime. Garza had already been charged for DUIs five times, making this an even bigger tragedy, considering that he should have never been on the road to have a chance to cost people their lives.