Emily Moldenhauer and Joshua Cooley said they love being of service.

The Wasco High School AG Prep Leadership Club hosted a food drive to benefit those in the community affected by food insecurity.

The students practiced hard work, responsibility and caring for others. These values are key to the APLC.

The president of the club, Emily Moldenhauer, said the experience was an opportunity to take action and advocate for your beliefs.

With his club's support, including the club officers, Cooley has organized these events for the past few years.

He said he was motivated to do this because the community matters to him.

"I care about Wasco and know there are families and individuals in need."

Cooley added, "I feel what we are doing is making Wasco a better place by bringing different organizations and clubs to team up and support the residents of our town."

Many students contributed to the effort.

Volunteer FFA club member Arturo Nunez said it's a good thing to do to help others that are less fortunate.

"It's the season of giving, and I love Wasco. This is making an impact on the people living here," Nunez said.

He said he is learning communication, working as a team and being kind to others.

"I feel empowered. There is a lot of negativity out there in the world, and events like this help lift people's spirits. It shows that there is still good in the world."

"We bring peace after a series of violent crimes in Wasco. By bringing light to dark situations, we create awareness by helping each other as the need arises."

He added that in Wasco, many residents live with food insecurity.

Maria Perez is one of them.

"I am happy, especially now that it is hard to afford things like food. This helps me a lot because I am a single mom of four children," Perez said.

"The best part is that you don't expect it; out of nowhere, you drive through, and there is help for you."

Marisol Gonzalez said this was great because she is out of work.

"We always struggle with money. I think this event is wonderful. It comes just in time for the holiday season."

Some said the food would help with their Christmas meal. 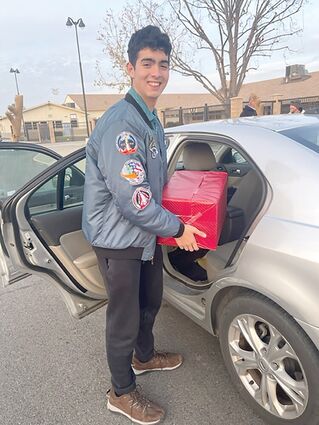 "It saves me money during these difficult times over the holidays. I received a box of food and a warm sweater for my daughter," Evelia Lopez said.

There was a good amount of people that contributed to the cause.

"We worked really hard to put this together," Nunez said.

The club hopes to carry on with the tradition of serving the city of Wasco for many years to come.

"Sometimes all it takes is a loving heart and the passion to make a difference," Cooley said.