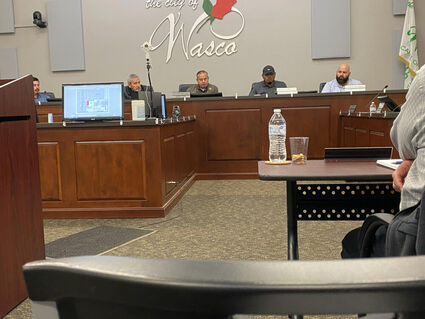 In this agreement, the HSR would agree to five different agreements, each addressing a different phase of the contract.

During the past decade, the HSRA and the city of Wasco have been in negotiations. Various project impacts, especially the former labor camp situation, created friction between the two parties. Recently, secured funding has removed a significant barrier to settlement of the situation. The city and HSRA are now finalizing a series of agreements to resolve the situation.

In one agreement, known as the Cooperative agreement, HSRA provides $6.5 million funding for projects, such as 13th Street improvements, reconstruction of 12th Street, to Poso Avenue and alley reconstruction, sewer line connection between J St. and H St, and the 6th Street closure and rehabilitation.

In this agreement, the HSRA would pay the $6.5 million to the city of Wasco upfront, and the city would then hire the companies to do the contracting and the work, and then turn in the receipts to the HSRA.

Another agreement is the Labor Camp Demolition and Clean-up. In this agreement, the HSRA would pay the city up to $9.3 million for the demolition of the camp, including the asbestos removal and the clean up of the area. According to City Manager Scott Hurlbert, there would be benefits also to the city by allowing the Kern County Fire Department to use the area as a training site, getting the materials disposed of, while giving the county a resource for their training purposes.

The Operation and Maintenance agreement would see the city of Wasco receive $2.9 million to cover the city's capital and O&M costs for the Amtrak Tunnel and Poso Avenue Underpass. The $2.9 million is an estimate on the amount of money it would take to maintain the underpass during the time the tunnel will be in use. According to Hurlbert, it is understood that Amtrak intends to eliminate the stop in Wasco from their routes in the next seven to eight years. In the event that Wasco is eliminated as a stop, the Poso Underpass would no longer be necessary. It is the HSR's responsibility to maintain the underpass and remove or close the underpass once it is no longer necessary. Councilmember Gilberto Reyna questioned the guarantee that the HSR would do what is necessary to close up the tunnel. "If it is just fenced off, people could still get in there and it may turn into a place that would attract illegal activity. It would become an eyesore and also a potentially dangerous situation."

Hurlbert said that they would need to get assurance that the tunnel would be closed up after it is no longer needed to assure that this would not happen.

Reyna also asked what kind of timeline they are looking at before the work begins on the different projects. Hurlbert said," Well, the agreements need to be finalized, signed and put into action. Then, the process of bids and contracts could begin. We are looking at at least six months in a best case scenario."

Once all of the agreements have been finalized and signed, it is then agreed that the city of Wasco would waive their complaints filed against the HSRA. This has been a long time coming and the council is looking forward to a conclusion to this situation, which looks like a very real assurance at this time.