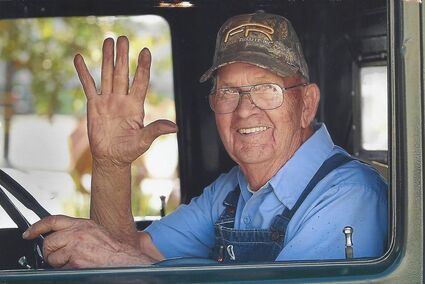 He was preceded in death by his parents, Newt and Letha Holt, and siblings Bill Lebo, Fern Ames, Glen, Donald, Irene, Freida and Geraldine, and several faithful furry companions, most notably Dirty Harry and Sugar Baby.

Born in Missouri a sharecropper's son on July 12, 1928, Jim lived a full and adventurous 94 years. Famine and lack of work forced two moves for his family, one to Arizona, and then a final one to the labor camps of Shafter.

After a childhood of working in the fields with his family, Jim was drafted in 1950 and served in the Korean War as a mechanic.

After returning from the war, he started The Hut Drive-In, but didn't stay in the restaurant business for long. He went to work in the service station and garage business and ended up with two service stations and ran those until 1968, when he bought five trucks and spent 10 years in the trucking business.

Wanting to get back into the mechanic field, Holt opened Jim's Repair Shop in 1981 and remained there for 38 years before finally closing up shop in 2019.

Some of Jim's fondest memories were made on the road, where in 11 years he traveled 450,000 miles on a motorcycle, most of those with his beloved companion, his Border Collie Dirty Harry, riding on the back. He rode through 43 states and three provinces of Canada. He made countless trips to NC on his motorcycle, visiting his daughter, grandchildren and great-grandchildren, who thought he hung the moon.

His final adventure was flying back to NC to spend Christmas with them, where everyone said their final goodbyes. He was determined to return to his wife in Shafter and made it home just three days before he passed away.

Jim left an indelible mark on all that knew him. He was the oldest kid you'd ever meet and was especially loved by children and dogs, and he loved them back even more. His friends and family would all agree that his stubborn nature was one of his most "endearing" qualities. As a friend recently wrote in a tribute to him on Facebook, "There were two ways to fix things, Jim's way and the wrong way."

He certainly lived life on his own terms and squeezed every ounce out of life that he could. We could all be so lucky to be so loved and live life as big as he did.

We will celebrate Jim's life with a chapel service at 11 a.m. on Jan. 17, at Peters Funeral Home, 844 E Lerdo Hwy. Following the service, please join us for a full military sendoff at 1:15 p.m. at the Bakersfield National Cemetery, 30338 E. Bear Mountain Blvd., Arvin. The family will receive visitors following all the services from 3-5 p.m. at China Cuisine, 563 James St., Shafter.