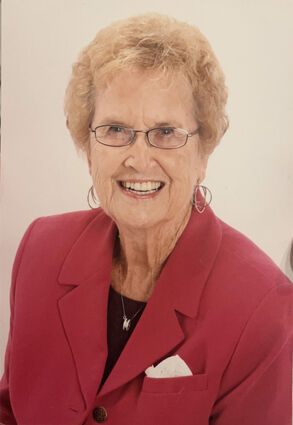 Loretta June Crissman Rogers was born on Aug. 3, 1930, in Joplin, Mo., to Paul Preston Crissman and Mary Flora Crissman. She was the baby of the family, joining brothers Paul Eugene and Kenneth Harold Crissman. Loretta grew up in the 1930s, playing with the neighborhood boys and her older brothers. This undoubtedly contributed to her spunkiness, and as she explained, "I think I was their leader." Loretta's everlasting sassiness, her smile, sense of humor and kindness will always be among the traits for which she will be remembered.

Loretta attended elementary school in Joplin, then graduated from Joplin High School in 1948. She attended every high school class reunion over the years, the most recent being her 70th in 2018. She met one of her lifelong best friends in high school, Charlene Mitchell Robertson, and remained friends, speaking over the phone weekly, until her passing.

Shortly after her high school graduation, she met the love of her life, Glenn Dale "Pete" Rogers, at a professional wrestling match in Joplin. She adored his "pretty red hair," and they spent many dates dancing the night away. Pete was in the military, and Loretta was working as a secretary at the time. On Aug, 6, 1949, she took two buses to meet Pete in Arkansas, where they secretly married at the local courthouse. She returned home to Joplin, and he to the military, where he served in Germany. She would often recount that she told her mother in a letter to "set another plate at the table. Pete and I got married."

Pete and Loretta moved from Joplin to California in 1950, where Loretta gave birth to her son, Ronald Eugene Rogers, after a night of dancing with her husband and cousin. The story of Ron's birth was a story she enjoyed sharing until the day before her passing. She said Ron was "the nicest reward for us during our lifetime."

Loretta worked as a secretary and bookkeeper her entire life, proudly saying she would work until she was 90, which was a goal she set for herself as a little girl. She retired at the age of 91, in the spring of 2022, after spending many years working for Wayne Hodges Trailer Sales, Fred West Accounting and Tri-Star Agrinautics, all in Wasco. She gained numerous friends during her years as a bookkeeper, specifically Jimmie Fredrick and Carrie Thomas, who helped immensely with getting Loretta to and from once she stopped driving well into her 80s.

Always an independent woman, Loretta never remarried after Pete's passing in 1985. She filled her time with work, dancing, shopping and traveling with her friends, caring for women in the community, and Sunday morning breakfasts and day trips with her grandchildren, Amanda and Matthew, until they were teenagers.

She became a great-grandmother to Taylor, Tyler, Emily, Owen and Wyatt. She was so very proud of them, talking often of Taylor's college graduation, Tyler's football, "Sweet Emily's" piano playing, Owen, who was the spitting image of his father, grandfather and great-grandfather, which she always delighted in, and Wyatt, her "little boy."

Loretta was well-known throughout the farming communities of Wasco and Shafter. She spoke of her farmer friends often and will be remembered for baking her famous German chocolate birthday cakes for them until she lost her vision. She always remembered a birthday, and never let you forget her own! She was a light in this world, full of love, laughter and positivity. She will be missed by everyone who had the pleasure of knowing her.

Thank you to the nursing staff at Hoffmann Hospice who not only made Loretta's final days comfortable, but made the transition for the family as peaceful as possible. We will always remember the kindness shown by everyone who walked into her room and our lives.

Graveside Services will be held at Wasco Memorial Park on Friday, Jan. 6, 2023, at 2 p.m. In lieu of flowers, the family requests donations be made to Hoffmann Hospice at hoffmannhospice.org/donate/general-donation/.