Country to come alive on stage

On the heels of its successful winter recital, Planet Dance Studio has begun preparations for its upcoming summer gala on June 17 at the Shafter High School Auditorium.

The theme this year is the "Wild, Wild, West," where the dancers will perform to music from the biggest country stars, from current to legendary. It will be a take on all things country with original costumes.

Almost 100 dancers are expected to showcase the talents that they will have cultivated over many months of practice, training from February until they hit the stage in June.

It will be the studio's midyear performance. Each year hundreds of people attend.

There will be 18 different routines in the genres of jazz, ballet, hip-hop and tap.

One can expect enthusiasm, excitement and entertainment with a high level of energy and creativity.

Jacob Hernandez is the dance studio director and teacher. He has been dancing and teaching professionally for the last two decades since the school was established.

"It's in my blood. I was born to dance and follow this career path; it is something I was called to do," Hernandez said. "I've been dancing since the age of six."

His mother, Corine Matera, founded the school, and Hernandez said the reason for choosing Wasco as a location was because of the small-town feel and to fill a much-needed void.

"At the time, and to this date, there was no dance studio of this caliber, and we were directed to Wasco for that reason," Hernandez said. "I love the camaraderie, and the people here are very passionate."

"It's been amazing over the years to interact, bond and build relationships with the families here in Wasco, Shafter and surrounding areas."

There are three other instructors in addition to Hernandez. They are Vickie Limos and mother and daughter team Veronica Garcia and Isabella Garcia.

They have dedicated many years to the studio, including Vickie at 19, Veronica at 17 and Isabella at 16. All have poured their love of dance into their teaching.

"It is a group effort that we bring together that really makes the studio work," Hernandez said.

He said his students are so talented and so full of energy with tremendous drive.

"I love seeing them completely uninhibited and fearless. They feel they have a safe place in our studio to be who they are."

The studio is open to ages 4 to 18. All levels are welcome, including beginning, intermediate and advanced.

"We get tons of new students with no experience that come through our doors that are super shy. They go through our program and are a completely different person after the season," Hernandez said. 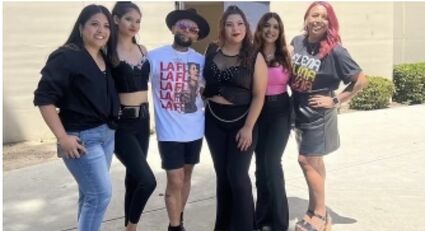 "They become more confident and outgoing. Students also learn time management and discipline that helps them outside of the studio that they can apply to their everyday lives."

Planet Dance Studio has a competitive "Team Galaxy," where they will be headed to Redondo Beach on Feb. 18 to compete against teams from southern California.

"In the past, we have won every award from national to international," Hernandez said.

"There is a misconception that it is expensive to join a dance studio, but with us, it is actually very affordable," Hernandez said. "We are here for the community that has treated us so well."