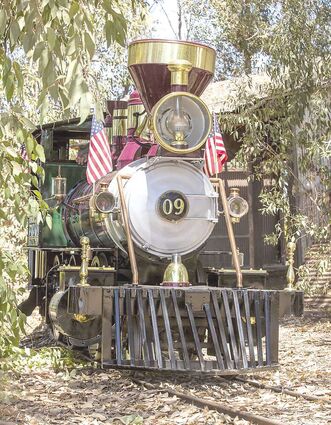 This train was handmade by Merril Lehman.

Everyone who has lived in Shafter for any length of time knows about the man who had a real train on his property. Kids growing up would marvel at the machine as it chugged along through his orchard.

Merrill Lehman passed away recently, leaving a large footprint in the history of Shafter.

Lehman graduated from Delano High School and went to Fresno State University, where he studied agronomy. Armed with his degree, Lehman worked as an agronomist for the USDA Cotton Research Station for decades. He also loved to tinker on different projects, from restoring old cars, which he turned into Antique Fender Works, to restoring player pianos.

Lehman had a very creative mind and a determination that would allow him to meet a challenge head on, no matter the obstacles. Lehman began work on his train decades ago after he bought a general train building plan.

Lehman decided to make his train about six times larger than what the plans called for. He acquired different parts, while hand-making most of them. The engine, caboose and wheels were all hand-cut and welded to fit. He also perused different junk yards looking for parts that he could use. 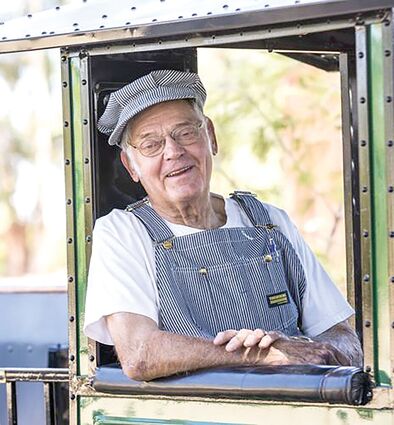 Merril Lehman loved giving his family, friends and community rides on the train.

The Shafter Press featured Lehman in an article years ago, where he talked about his experiences with the train. "I have no idea how much I have spent over the years. It was just a hobby." The hobby entertained an entire generation of Shafter residents, as well as generations to come.

"I remember going out there as a little kid and just amazed at the thing. I couldn't believe that I was upclose with an actual train," Mike Laruge said. He wished that it would have been around so his grandkids could have seen it.

Lehman also made a small bridge and tunnel that the train could run through, giving kids and adults alike a treat as it made its way through the forest of trees and the bridge and tunnel. "We mostly take kids from around the area on rides, as well as people from our church," Lehman had said.

Lehman put the train up for sale in 2016, when he and his wife Adele moved into Bakersfield.