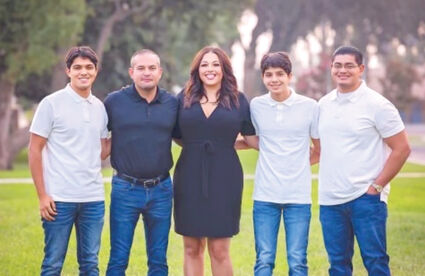 Vincent R. Martinez is the new mayor of Wasco. He brings experience, enthusiasm and a willingness to work as a team. Together with the council, he hopes to empower residents and provide them with a better quality of life.

"I am excited to take on the role. The city is in a good position to make many positive changes. I'm looking forward to helping guide the city in the direction we have been going through in the last few years."

He has two years of council experience and has served on the Wasco Recreation and Parks District and Measure X boards.

As mayor, his number one goal is to address public safety and help Chief of Police Charlie Fivecoat build the new police department.

"We couldn't have found a better candidate. He has four main qualifications: the experience, the education, intelligence and political savvy to navigate the formation of a department that residents can trust and rely on."

Other projects he cares about are the agreements in place to resolve the issues with the High-Speed Rail project.

In addition, he hopes to continue to build the city's infrastructure.

"So we can grow and attract jobs and quality housing for our citizens. Also, the beautification of our city is something I would like to see and have our city be attractive for people when they enter our city."

Martinez has personal pet projects he would like to come to fruition, including improvement on roads which he said the city has made a lot of progress and wants to keep that up.

"I would also like to see us move forward with building our new animal control center."

He said he is thrilled about being mayor but a bit nervous.

"It is an important position being the spokesperson for the city. I don't want to make mistakes. I look forward to being involved with our residents. Often people in the community don't know what is taking place. Hopefully, through social media and community outreach, we can let the public know what is happening within the city. I value the input from our citizens, even those that disagree with me."

Martinez believes he has the right team in place.

"We have a solid council that contributes a wide variety of knowledge and experience, working together to do what is best for the city."

He is passionate about being a public servant.

"My background as a young man was in law enforcement, and when I was younger, I coached sports. Giving back is key to me because the community gave me so much. I grew up as an only child without a father figure. If it wasn't for the community to guide me, I don't know where I would be now. They gave their time to help me grow into a man, and I want to give that back to the city."

Martinez is a lifelong resident of Wasco and said it is one of the most amazing places you could ever go to.

"I have lived my entire life in Wasco. With my past job experiences, I have visited many communities, and I have never seen a city that was so integrated where it doesn't matter your race, religion or income bracket. Everyone here is working towards a common goal of making this city a better place. When our residents need something, everyone reaches out to help lift them. Not to say our city doesn't have problems, but those problems are fixable."

Martinez believes he was selected because he has spoken from his heart over the last two years on the council.

"I am passionate about the city, and I don't think anyone can doubt my love for Wasco. I hope that showed through during my time on the council."

Some values he said he would bring to the role of the mayor are honesty, integrity, transparency and openness to compromise.

One of the biggest challenges faced, and that he foresees, is a need for more communication with residents.

"I speak to many people in our community and hear their grievances. In many situations, their grievances are already being addressed by the city. Once we explain to them what is taking place and the amount of red tape that goes into that, they understand we are taking steps to resolve issues. They are relieved to hear we are making progress, but it all goes back to us not effectively communicating with our residents."

On crime, he stands firm.

"Our state has created a situation where criminals run our state. Local law enforcement agencies can't prevent crime when they can't keep criminals in jail. Unfortunately, when you have a documented gang member driving around with a gun, and he gets arrested, he will be out of custody by the next day."

"It is getting to the point where many of our residents don't even contact law enforcement because they think nothing is going to be done, and that should not be the case."

He believes the council and city staff are poised to do good work.

"We are in a really good position that I believe we have the right people in place within our city to help to implement the vision of our council from the city manager to department heads to all of our city employees. We have put in place a team that cares about our city. They are hard-working, and they understand their roles. They are helping us to move forward."

Martinez is grateful for the opportunity he's been given.

"I am honored to have been selected for this position. I want residents to know I am approachable, and I want them to approach me and express their concerns or even to tell us positive things in our community."