Shafter to buy land for road 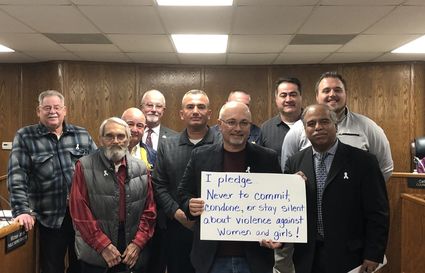 The men on the City Council, as well as the other men in attendance at Tuesday's meeting, take the White Ribbon Pledge against domestic violence.

The city will move forward in purchasing land that will be used for the West Beltway Street Project.

This project will be a portion of roadway from North Shafter east of the Target Center south to Highway 119, eventually extending from Shafter to Bakersfield. The land planned for purchase is owned by Bidart Bros. and Glenn Holt. The land owned by the Bidart Bros. is expected to sell for $2.1 million, but is still being negotiated. The price includes the land, lost crop production and for the relocation of irrigation systems. The portion owned by Holt has no crops or activity on it and is being valued at approximately $88,000.

In other actions, the council agreed to negotiate with Ross Stores, Inc. for the use of the city's Container Yard next to the existing Ross facility. Ross Stores were looking for additional storage space because there are months out of the year when Chinese New Year's production shutdown interferes with the shipping of goods from China. Production is shut down in the country for at least a week, with most factories shutting down for a month. During this time, Ross needs more storage space for their merchandise. City Manager Scott Hurlbert said it is projected to net the city about $20,000 per month in revenue for the use of the yard.

The City Council received an invitation from Barbara Gladden and Colleen Diltz from the Shafter Womans Club to participate in the White Ribbon Campaign, raising awareness of the issue of domestic violence. Gladden said that domestic violence is an issue that touches every community and affects not only the man and woman involved, but also the children who are witness to the abuse.

Gladden said that there were 109 cases of domestic violence reported to the Shafter Police Department last year, and, according to studies, about half of domestic violence cases are not reported at all. This number, Gladden said, is disturbing, and they invited the men in attendance to take a pledge that is recited during the campaign, vowing that they will not tolerate domestic abuse. Since 1991, men have been wearing white ribbons to state that they will not condone violence or abuse against women or girls. The men in attendance wore the white ribbons and took the pledge.

Public Works Director Michael James updated the City Council on the repair and updating of the Rodriguez Park basketball courts. He also reported that the city is looking for possible locations for new basketball courts.