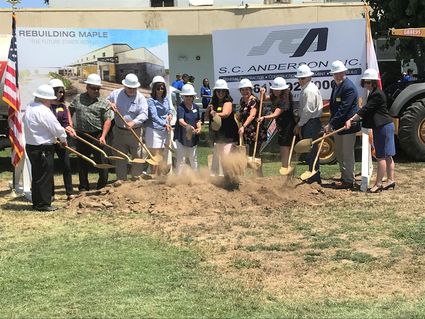 A groundbreaking was held a year ago, beginning the biggest project in Maple School's history.

It was just under a year ago when Maple School held a groundbreaking ceremony, celebrating the beginning of the next chapter in the school's history. Flash forward, and the renovation project has turned the school into a modern facility designed to serve the district for decades to come.

The latest phase of the project saw the demolition of the administration buildings that will be replaced before school reconvenes in August. For the time being, Dr. Julie Boesch and her staff are making do with a portable trailer, but it is a small price to pay, according to Boesch, whose determination helped the project become a reality.

For years, the school had been deteriorating, with leaks forming in roofs, no air conditioning in many of the buildings and a lot of the classrooms in disrepair.

Boesch and her staff, with help from Woody Colvard, who had worked in the Projects Department for the Kern High School District, created a plan to rebuild the school and began looking for support to help with their dream.

Becoming a regular visitor to the State of California Education buildings, as well as writing letters to local politicians, Boesch never gave up and dedicated herself to getting them the help that they needed. When local politicians became involved, including state Sen. Jean Fuller, Sen.Andy Vidak and Assemblymember Rudy Salas, the wheels started turning. Funds became available and the project was approved.

The first phase of the project saw replacement of a group of classrooms, followed by another set of classrooms in the second phase. The final phase is the replacement of the administration multi-purpose building that will serve the students in a more efficient and productive manner. 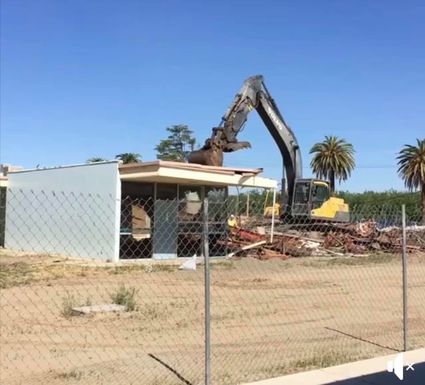 The final phase saw the demolition of the administration buildings.

The history of the school will be entering a new era with the completion of the project. Decades ago, the school went through its first renovation when a fire ripped through the school, destroying the majority of the buildings. In what seemed to be a good idea at the time, administrators decided to avoid the chance of the school burning down again in the future and built the school out of concrete.

With the natural deterioration of the buildings and the absence of modern-day conveniences such as air conditioning, proper insulation, and updated fixtures, the necessity of a new structure became evident. Boesch said that the project could not have been possible without not only the politicians who came on board, but mainly without the support of the board and parents that the school has in place. "We are walking into a bright future of our school district, and it is thanks to an amazing staff, wonderful students and a group of parents second to none," concluded Boesch.