Body found in silo near Shafter 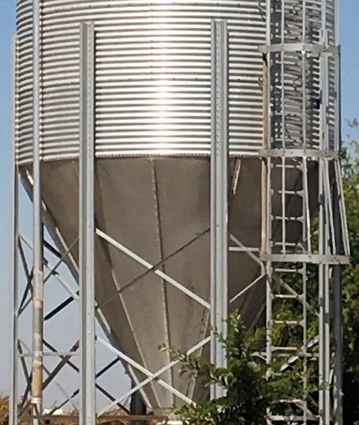 The silo in which a body was discovered off of Zerker Road near Lerdo Highway.

A grisly discovery was made by a farm worker last week at Westside Farms.

A body was discovered in a silo in which a worker was trying to withdraw gypsum at the business, off of Zerker Road just south of Lerdo Highway. Fearing that an auger that pulls out the product was clogged, the worker investigating the source of the blockage found that that he had found a human body.

The gender was not known at this time, but has since been determined to be a man. As of Wednesday night, his identity had not been released.

Shafter police officers responded to a call describing something suspicious inside the silo at approximately 9:10 a.m.

The Kern County Coroners Office responded to the scene and started an investigation. Shafter Police Chief Kevin Zimmermann said, "Our investigative team came out after one of my officers conferred with the coroners office and confirmed that there was indeed a body inside of the piece of farm equipment."

Zimmermann said that an auger is basically a 20-foot-tall, 10-feet-wide piece of equipment that comes to a point at the bottom and, in this case, distributes gypsum. Shafter police said they did not know if foul play was involved. The investigation is ongoing.