A big bang at SHS 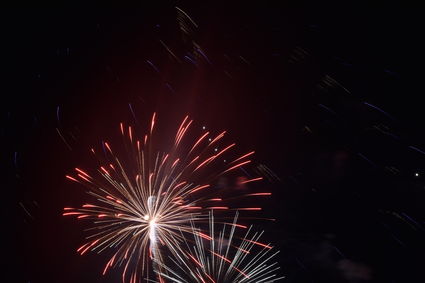 The sky was aglow with an array of shells.

At the holiday celebration at Shafter High School on Wednesday night, the sky was lit up like, well, the Fourth of July. The event was put on by the Shafter Chamber of Commerce with the support of several local businesses and a generous community.

The gates opened at with a full slate of family activities in SHS stadium football field. In addition to a great variety of food available, including tacos, hot dogs, hamburgers, burritos and tortas that were bigger than a Frisbee, there were several organizations on hand to give out information to their respective clubs' activities and membership information. Those attending the event included the City of Shafter and the Minter Field Air Museum.

The emcees of the event were Danny and Kait Hill of Rewind 98.1 of Bakersfield. Hills kept the energy up at the event with a mix of music and fun events including dance contests for the kids and adults, handing out prizes to those who braved the heat and stage fright to show off their moves in front of an overflow crowd. The kids received gift cards and concert tickets, while a one adult received a trip to Las Vegas and a concert.

The event has built a reputation as one of the premier happenings for the holiday, with the activities and the colorful fireworks show. It draws from Bakersfield and the surrounding communities in Kern County. "We have been coming here for the past five years. We love it. The fireworks show is awesome and there is so much to do for the kids that doesn't cost a fortune," said Margarita Nunez, who was there from Bakersfield with her husband and three children. 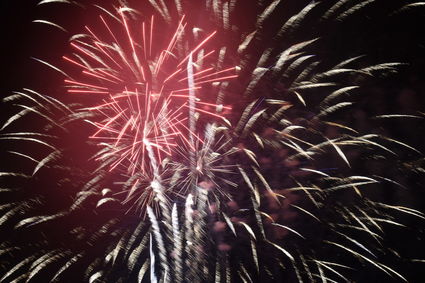 The sky was aglow with an array of shells.

Pinups and Patriots was there with Ronald Pierce, Alan Anderson and the rest of crew at Minter Field Air Museum. This organization dresses as they did in the heyday of the USO and were posed for pictures in front a few of the museum's vehicles, including the Yellow Follow Me Jeep and the LOACH helicopter. Attendees also had the chance to sit in the cockpit of the vehicles to get a pilot's view in the craft.

As dusk arrived, the lights went out and the sky was lit up with a dazzling display of fireworks. Zambelli Fireworks International put on a show that "is one of the best in the county every year. We love the show, especially the magnificent finales," commented Rafael Diaz, who traveled from Arvin with his kids and grandchildren for the event. "With the food, activities for the kids and the show, it is a great time for our family to spend the holiday in a safe, fun place."

"The crowds are getting bigger every year and it is really a testament to the great support we get from the city, the residents of Shafter and the local businesses," said Marianna Martinez, a Shafter resident who has been attending for over 10 years.