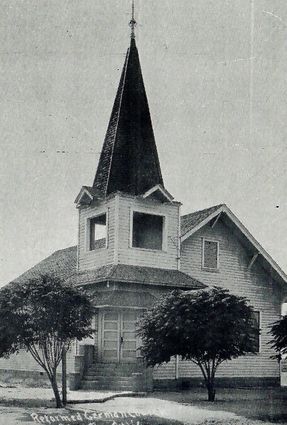 The original building from 1921.

The Ebenezer Reformed is one of many churches in the city with a rich history and will be commemorating its 100th year with a ceremony this weekend.

Ebenezer Reformed, located at the corner of James Street and Sunset Avenue, was organized on April 14, 1919. They give thanks as they look back over the last century and behold "what the Lord has wrought."

According to Greg Williams, the name "Ebenezer" is from 1 Samuel 7:12, where, upon recognizing God's help, Samuel set a stone between Mizpah and Shen and called its name Ebenezer, saying "thus far the Lord has helped us." Today, they still acknowledge the gracious help of God.

The term "reformed" comes from the 16th century Protestant Reformation – a movement from the Catholic Church "back" to the Bible as the primary standard for faith and life. Ebenezer is part of the Reformed Church in the United States.

In 1919, nine families of the Reformed tradition came to Shafter from Lodi to acquire new farmland and transform the dry desert into productive agricultural land. They bore the family names Schnaidt, Edelmann, Mettler and Kirschenmann.

Once in Shafter, they labored and soon found their newly acquired land very productive.

However, having left their home church in Lodi, they missed assembling together. So, these early settlers began to meet in the home of Mr. and Mrs. John Schnaidt, in the first house west of the Nazarene church on West Lerdo Highway. Then, for a time, they met at the Seventh Day Adventist church on the corner of Lerdo and Poplar.

As the congregation grew, there was an increased desire to have a church building of their own. Construction began in the fall of 1920 and was completed in early 1921 for a cost of $5,000, including furniture. The pulpit and communion table were donated by two Reformed congregations in Lodi.

On May 28, 1921, the small congregation dedicated its own house of worship in a service officiated by Rev. W.P. Thiel of Salem Reformed Church of Lodi.

In 1941, a parsonage was built next to the church for the pastor and his family, which has seen many improvements over the years.

The church building was a one-room structure, making Sunday School extremely noisy and difficult to conduct. To solve this problem, at its annual meeting in 1951, the congregation decided to build an addition to the church and enlarge the church auditorium. A garage for the parsonage and two new restrooms were added as well. On Oct. 21, 1951, the congregation rededicated the church, with Rev. W.P. Thiel and Rev. Robert Stuebbe delivering messages for the occasion.

The next priority was to improve the Sunday School and fellowship facilities. On Oct. 9, 1966, a contract was signed to build a new hall on the corner of Shafter and Sunset. On Nov. 6, following the regular morning worship service, a formal groundbreaking was held in the presence of the congregation in the area of the proposed hall. The fully completed building was dedicated on June 12, 1967. Though the property has undergone many improvements over the past 100 years, the church is still in the same location as it was in 1921.

Ebenezer has had 14 pastors. The current pastor, Rev. Ruben Zartman, was installed on March 18, 2018. He and his wife, Heidi, came to Ebenezer from Chicago Heights, Ill.

Over the past 100 years, Ebenezer has hosted 10 denominational meetings with pastors and elders from RCUS congregations across the country, been active in local Shafter activities and celebrations, conducted monthly worship services at the Shafter Golden Living Center, been involved in prison ministries, hosted a weekly radio ministry (Sundays at 8 a.m. on KERI-AM 1410), and continues to conduct worship services every Sunday at 10:00 a.m., followed by Sunday School.

In 2014, Ebenezer commissioned Rev. Valentin Alpuche as a missionary pastor to the Hispanic community in Shafter. The name given to the new ministry was Iglesia Reformada Valle de Gracia (Valley of Grace Reformed Church). 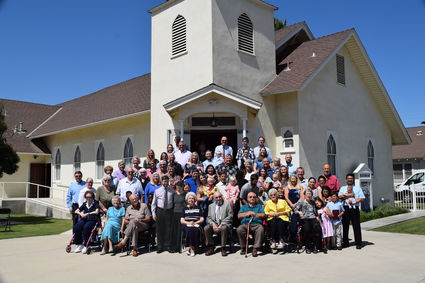 The Ebenezer Reformed Church will be celebrating 100 years of worship.

They meet on Sunday evenings at 6 p.m. at Ebenezer. In addition to holding a weekly worship service, Rev. Alpuche began teaching ESL (English as a second language) lessons, as well as a weekly U.S. citizenship class. The ministry also started a Spanish radio program called Reformando tu Vida (Reforming Your Life) that can be heard on Sundays at 9 a.m. and Mondays at 1 p.m. on 100.3 FM and 1100 AM.

To celebrate their 100th anniversary, Ebenezer will host a short reformation conference on Saturday, Oct. 19, 9:30 a.m.-2 p.m., with former pastors teaching about Ebenezer's missionary work, preserving their reformed heritage and how God preserves his Church. The public is encouraged to attend

The public is also invited to their 100th anniversary worship service on Sunday, Oct. 20 at 10 a.m., or any Sunday service.