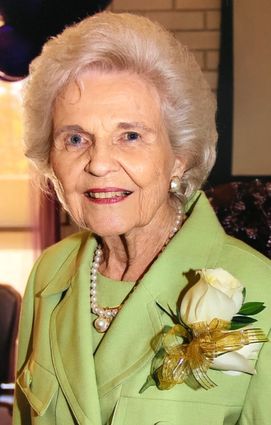 A joint funeral service officiated by Pastor Jeff Chandler was held Nov.25, 2019, at First Presbyterian Church in Bakersfield for Izetta Agnew Camp, 92, and her husband Donald Max Camp Sr., 94, who died peacefully at home within days of each other surrounded by their family. Private interment will follow.

Izetta was the fourth of five children born to Edwin Hugh Agnew and his wife, Izetta Pruitt Agnew, in Starr, S.C., where he was a distinguished farmer. Together with her brothers Pruitt and Harry, and sisters Betty and Floride, she grew up on the family farm. She attended Furman University, known then as Greenville Woman's College, before graduating from Winthrop College.

While at Winthrop, and at the insistence of her father who was a Clemson classmate of W.B. Camp Sr., she invited Camp's son Don to a dance on one of his business trips from

Kern County to Yemassee, S.C., where his family maintained Buckfield Plantation, as he didn't know many people in the area.

He accepted and courted Izetta for several years. After college, she taught classroom music. During their courtship, she never knew when he would return to visit, but she would drop everything nonetheless to spend time with her beau, exchanging tender love letters, which they kept.

After a six-week engagement, the couple wed in 1952. Their union was blessed with five children. Izetta often joked that she doubted Don would have married a South Carolinian had it not been for all the oyster beds and great swamp fishing there. They moved to California, which she had never visited, and she never lost her sweet southern drawl.

By Don's account, his bride wasn't much of a cook at the beginning of their marriage, but over time she became quite accomplished in the kitchen feeding her large family. She and Don organized a food and wine group with friends and enjoyed traveling once everyone had left the nest. She and her husband were lifelong members of First Presbyterian Church, and they enjoyed their years of membership at Stockdale Country Club.

Izetta had an innate ability to make a stranger feel like her best friend. Generous with her heart, she was quick to offer her help whenever she saw or heard of someone or family in need on the farm. She kept an immaculate home, was always impeccably dressed, and was the epitome of southern charm and grace.

Izetta used her green thumb to cultivate her garden, which still includes her blooming "Izetta's Bright Starr" rose. It was a gift from her family, and her yard was the envy of her neighborhood. Her grandmother raised peafowl in South Carolina and she did so as well. The original peacocks at Hart Park were donated by Izetta

Believing in the importance of giving back to the agriculture industry and the community where she flourished, she delighted in helping others, whether it was Assistance League, the Bakersfield Museum of Art, PEO, Daughters of the American Revolution, Town & Country Garden Club, Mercy Hospital Auxiliary Board or her church. In 2015 she was given the California Agricultural Leadership Foundation's Common Threads award, which honors women in agriculture.

Married 67 years, Izetta and Don's devotion to one another and their family grew sweeter as the years went by. They truly loved being together, side by side in life, and now together in death.

Izetta was preceded in death by her parents, sister Betty, and brothers. Those left to cherish her memory are her sister Floride Findley, her children Georgia Bell, Don Jr. and his wife Debbie, Edwin and his wife Kaye, Clayton and his wife Karrie, and Carolyn Pandol and her husband Jack. She is also survived by 13 grandchildren, 13 great-grandchildren, and a 14th on the way.