Pastors finds 'a place to belong' 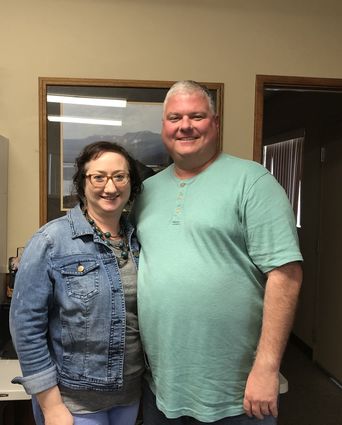 New pastor Steve Dobbs and his wife, Robyn, have found a "place to belong" in Shafter and believe it to be a perfect fit.

Since August 4, Dobbs has held church services at the Shafter Senior Center Sundays at 11 a.m. The church, Community Circle Church, has grown a congregation of around 30 parishioners by drawing those in the community that are looking for a place to belong.

"We really believe it is important to feel a sense of belonging before you believe," said Dobbs. The name of the church speaks to their beliefs. "We believe that we need to worship as one with the congregation, not talking [BEGIN ITAL]to[END ITAL] them, but communicating [BEGIN ITAL]with[END ITAL] them – with everyone in the circle – instead of talking to a bunch of faces in a crowd," Dobbs said.

Dobbs and his wife hail from Porterville, but Dobbs has family in the area and a son engaged to a Shafter girl. "We have been shown so much support since we arrived here, from the people in Shafter and Wasco," Robyn said.

The couple learned about the rivalry between Shafter and Wasco and say it has been an eye opener. "I thought my school, Monache, had a great rivalry with Porterville, but it is nothing in comparison. It is an amazing relationship between them."

Dobbs expressed gratitude to the Shafter Recreation and Parks District for the cooperation they have received in having their services at the Senior Center. "Phillip [director Phillip Jiminez] and his staff have been so nice and welcoming. We are so thankful for them. We have already seen lives changed and that is why we do this."

It is important to Dobbs and his family to become involved in the community. They held a tailgate event after the service on Super Bowl Sunday, complete with free hot dogs and other refreshments.

"My son and I are coaching a basketball team in the Shafter Recreation League, and we have had such a great time with the kids," Dobbs said. One Sunday this month, the church will host an event after service to celebrate with their basketball team, along with a bounce house, food, and refreshments.

They also are going to offer a four-to-six-week series conducted by Dobbs' father for couples in need of guidance on finances. "A lot of couples are facing financial challenges and this series, based on a book by Dave Ramsey, helps people by changing the way they think about money and helping them formulate a plan to strengthen the grip they have on their finances in the right way."

Anyone who is interested in more information can go to yourccchurch.com. The couple is very excited about growing a church body and they believe, with the wonderful people in the community, the best is yet to come.