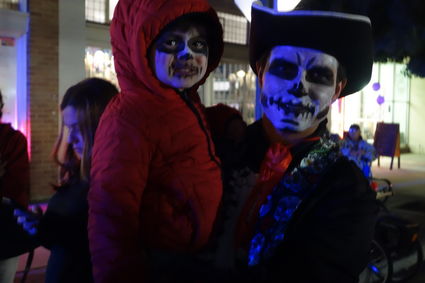 Cesar Daniel Marquez-Chavez and his 3-year-old son, Danny, celebrated Day of the Dead in November 2018 by donning full makeup and costume.

Cesar Daniel Marquez-Chavez, owner of Catrina's Cantina, came to Wasco and made it his own.

He died June 28 from complications of cancer.

Marquez-Chavez was born in Guanajuato, Mexico, and didn't learn to speak English until he was 16.

He owned the restaurant with his wife, Marcela Bujorquez-Marquez, for the past 2 1/2 years. Their restaurant provided the meals whenever the High Speed Rail Authority hosted their quarterly presentations in town. Mayor Tilo Cortez praised his margaritas on a Facebook message.

He started out as a dishwasher, Marquez told the Tribune in an interview in July 2018, and he worked his way up to management. He was also a licensed real estate agent and sometimes dabbled in real estate on the side, but he was focused on the restaurant and his family.

Friends and acquaintances remembered him fondly on Facebook after learning of his death. Marquez was known as a family man and was praised by many.