Pete Espinoza is running for council for the first time.

There will be six candidates on the ballot come November for the Shafter City Council. Three seats will be up for grabs, with Mayor Gilbert Alvarado, Chad Givens and Manuel Garcia having their terms expiring in December. All three Council members will be running to retain their seats. Three other candidates will be looking to fill them, with all three candidates running for the first time. Kris Lawrence, Rafael Zamudio and Pete Espinoza will join the three incumbents in the race for the three vacancies.

All six candidates said safety and economic stability are among their main concerns.

Kris Lawrence said he is running because he wants to make a positive impact on the council and he believes that his experience working at the Water District with policymakers in a board meeting setting have prepared him for the position.

Lawrence is a resident of the new development in Shafter at Gossamer Grove. "Being a resident in the Gossamer Grove area, I believe that it is important for us to have representation on the council," he said. He added that he would like to be a part of the continuing effort in keeping Shafter a safe town. "In the tumultuous times we live in, safety and economic security are extremely important. Shafter has historically been a very safe town, and it has done well with businesses. This is something I would like to be a part of."

Pete Espinoza said he has a love for the community and the people of Shafter. He would like to see the city prosper and move forward with the future in mind. A resident of Shafter for 54 years, Espinoza sees public safety and public works as key issues. "I want to see Shafter remain a safe community in which to live and to raise a family," he said. "A strong law enforcement which is supported by the city and the people is very important."

He also said that roads, schools, and parks affect the quality of life and need to be a priority. "I believe in high standards, but that is the easy part. Then you have to maintain them or they go right back to where they were," he said. "If Shafter is doing well then the people of Shafter will be doing well. I think we need to be united in a common goal, Shafter Strong."

Rafael Zamudio, a longtime Shafter resident, is running to work side by side with his fellow community members and to help Shafter reach its full potential. Zamudio said he would like to see Shafter prosper without it losing its small-town feeling, which is "the feeling that unites us and keeps us home grown with a touch of growth."

Zamudio said it is important for Shafter to find collaborations to help with the lack of resources for learning opportunities. He believes there need to be more educational sites for youths, and would like to extend the Shafter Learning Center. Zamudio also said a priority is making sure the city's resources are being used efficiently, such as holding each city department accountable for their resources, labor and funding.

"We need to make sure that there is a check and balance between departments and community members," he said. "We also need to reinforce the idea that city employees work for their taxpayer who reside in Shafter and remind them of our mission and goals."

Zamudio said Shafter is a great place to live and if given the opportunity he would help it grow without losing the human touch.

Chad Givens is running for his second term on the council. Givens said it has been a joy serving on the City Council and that he truly believes in the city, the people, the businesses, the employees, the families, just everything.

Givens said that even though Shafter is a small rural community, it has a big vision, a big heart and a lot of big opportunities. "I will continue to fight for our public services," he said. "We as a city offer things that many in this state or even county do not offer. From our top rated police department, to our phenomenal city services like our business and planning groups, to our one of a kind education partnership group, the Shafter Learning Center."

Givens said he has not and will not advocate for defunding these services because they are crucial to the success of Shafter's businesses. He added that he will continue to pursue business opportunities in the downtown district and industrial parks. He also is pushing for enhancing the downtown atmosphere.

Givens said he would keep supporting Shafter's unique education partnership and learning opportunities. "I think that it is important make sure it keeps functioning properly and not cut the budget without cause, which has been alluded to in the past year by some," he said.

Givens commented that he is excited for the next four years and for what is to come.

Council member Manuel Garcia is also running for his second term. A home grown Shafter resident, Garcia said he has enjoyed his four years on the council and is looking forward to helping finish what they had started. He said he believes the council has made great strides in beautifying the city, especially its roads and parks. "You can take James Street as an example," he said. "A lot of work has been put into that project and it looks great. There are so many examples of improvements being done on our roads and sidewalks." 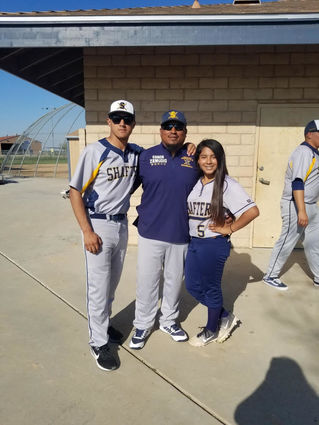 Rafael Zamudio is looking to be a part of a council that works for its residents.

Garcia said he has also been an advocate for a safe community and was in favor of hiring more officers on the Shafter Police Department. "I think that Shafter is one of the, if not the safest town in the country," he said. "I think that the chief and his staff have made Shafter the safest community around."

Garcia said he also believes Shafter needs to attract more nationally known franchises. "It would be great to see like a Kentucky Fried Chicken, or Popeyes in town. We also need to make it easy for businesses to come to Shafter, letting them know that we want them here."

Garcia also touched on the importance of the continuing efforts for the city to maintain its small town feel, growing, but not too big that it loses that special feel.

Messages and a request for a statement to Mayor Gilbert Alvarado went unanswered. Alvarado, who has served the city as mayor for the past two years, was first elected to the Council in 2008.