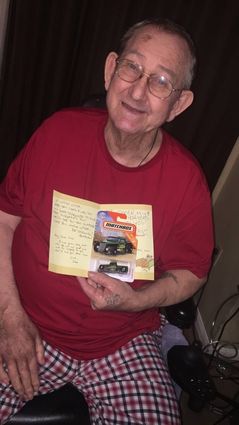 Omer Charles Adams was a beloved husband and father. Omer was born Jan. 18, 1941, in Poteau, Okla. He came to California by Greyhound bus in 1957 at 16 years old with his family, where they settled in Arvin. He met and fell immediately in love with Lydia Soto in the early 1970s.

They raised six children in Lost Hills. He moved his family to Wasco in 1996, where the family grew, and they welcomed many grandchildren. Omer was a hardworking man who worked for 19 years at the Lost Hills Water District, where he retired from in 2007.

Omer is survived by his wife, Lydia Adams, and children Alfred, Fabian, James, Jessica and Phillip, and many grandchildren and great grandchildren, along with brothers Bill Adams, Joe Adams and Sam Adams. Omer was preceeded in death by his daughter Sara D. Soto, and his siblings Dorothy Lewis, Betty Dill and William Adams, and his parents Emma and Edgar Adams.

His favorite pastimes included spending time with his children and grandchildren, watching western movies, fishing with family, rooting for the 49ers, eating good food and watching the hummingbirds that would come to his window. He was a man of a few words but left a lasting impact. Omer had a heart of gold and was a very humble man who would do anything for anyone. We are now celebrating him going home to our Lord. He was deeply loved by his entire family, and will always live on in our hearts.

Visitation will be held at Peters Funeral Home in Wasco, on Tuesday, Oct. 27, from 4 to 8 p.m., with Recitation of the Rosary beginning at 6. Funeral Mass will be celebrated at St. John the Evangelist Church, Wednesday, Oct. 28, beginning at 10 a.m., and interment will follow at Wasco Memorial Park. Condolences may be made at PetersFuneralHomes.com