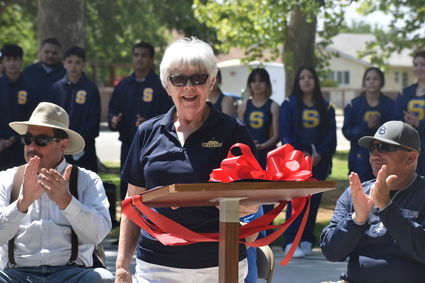 Mayor Cathy Prout spoke about the newest addition to the park.

The city cut the ribbon at Mannel Park on Saturday, opening up a new outdoor fitness court that will allow residents to work out on a variety of equipment.

The court features over 10 stations that people can do cardio and strengthening exercises and can keep track of their progress on their phones.

The court is a product of Fitness America, who specializes in exercise programs that can be used with a minimal amount of equipment.

"The entire project was the result of a federal grant, which means it did not cost the city of Shafter anything," said James. "With the grant, we are also refurbishing the volleyball court, including new sand, net, and poles."

The court has an array of boxes, which are used to jump up on and step up on, that works the muscles that are involved when walking stairs. There are also painted circles on the cement court, allowing participants to do a cardio workout. There are different styles of pull-up bars, sit-up bars, and other equipment.

A person can get a full workout by hitting all of the different stations in the court. 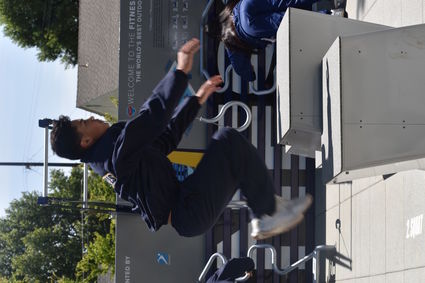 The Shafter High boys and girls wrestling teams gave a demonstration of the new equipment after the ribbon was cut.

You can keep track of your progress and learn how to use the equipment by downloading the Fitness Court app for your smartphone.

It will keep track of what equipment you worked on, as well as sample training programs that you can follow.

James told the attendees that the fitness court is just the beginning of the improvements and additions in store for the park. Next up is the refurbishing of the volleyball court, which has started this week, and there will also be improvements to the irrigation system.

The purchase of the fitness court was $117,800, with the installation work and consulting a total of $50,000. The volleyball court improvements, including the sand, came to a total of $25,400.