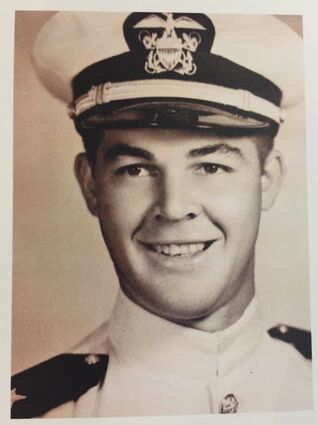 On Oct. 19, 2021, Merton Lynn Wiedmann went to be with the Lord and family that preceded him. He was blessed with a full and rich life, loving family and friends.

Mert was born in Shafter to Oscar and Hazel Wiedmann on April 16, 1924. Oscar and Hazel moved to their Shafter homestead in 1915. Oscar and Hazel attended the Shafter Congregational Church, where Mert met his future wife, Patty Stringham, daughter of Elwood and Angie Stringham. Both Mert and Pat went to Shafter schools and were May "King and Queen" in the first grade.

In high school, Mert excelled in athletics and academics. Mert was student body president and graduated in June 1942. He received a football scholarship to UCLA but sustained a knee injury before the first game.

Mert enlisted in the navy on Dec. 7, 1942, one year after Pearl Harbor. He was 18 years old at the time. He studied meteorology at UCLA and was sent by the Navy to midshipman's school at Notre Dame. Mert finished school on a Thursday; he and Pat decided to be married on Saturday.

Mert managed to find a way from Indiana back to California, barely arriving home in time to get a marriage license. Mert Wiedmann and Pat Stringham were married on Oct. 22, 1944. Mert and Pat traveled to Seattle for his first assignment for Navy weather prediction. Pat returned to Shafter and Mert was sent to Alaska, then was stationed, for his remaining time in the Navy, at Enewetak Atoll in the South Pacific.

In 1944, there was a devastating typhoon which hit the US Pacific Fleet. Many ships and men were lost in the "surprise" typhoon. The Navy did not want to be "surprised" again, and established weather prediction in active combat areas. Mert's assignment on Enewetak was to be the meteorologist aboard a PB4Y-2 plane that flew into the center of a typhoon to ascertain wind speeds and wind directions and try to predict its path.

After World War II, Mert returned to Pat in Shafter and met his 6-month-old daughter Lynn Ann, who had been born while he was away. Between the years 1950-1954, they welcomed the birth of three more children, Janet, Ted and Diann. Family was important to Mert. His children remember their idyllic childhood filled with love, laughter, support and many happy adventures.

After being discharged from the Navy, both Mert and Pat completed their pharmacist degree at the University of Southern California; Pat graduating in June 1948 and Mert in January 1949. After they graduated, they became managing partners of Stringham's Shafter Drug Store until 1977, when their son Ted and his wife Sandy joined them in partnership.

Mert was very involved in the service clubs 20/30 and Rotary; Shafter Drug Store also supported many community causes and events. Mert personally thrived on helping people and generously used his resources to do so.

Mert grew up in the Congregational Church of Shafter and was a lifelong member. In his younger years, he was very involved in the church and encouraged his family to also be involved. He believed in salvation through Jesus Christ. Mert also believed in doing what was right and strived to do so.

Mert and Pat enjoyed over 63 years of marriage and adventures before Pat's death in March 2008. Mert married Nola Garrison Russell in February 2009. Mert and Nola enjoyed years of travel and companionship.

The entire family wishes to thank all the many wonderful people of the family and community for all their love and support for Mert. We also want to express our appreciation for the excellent care and concern of Mert's physicians: Dr. Mark Tindall (Janet's husband) and Dr. Bindu S. Reddy (cardiologist) of Porterville. We also want to thank the caring staff of Hoffman Hospice.

Mert's memorial Service will be held at the Mennonite Brethren Church of Shafter at 11 a.m. on Saturday, Oct. 30.