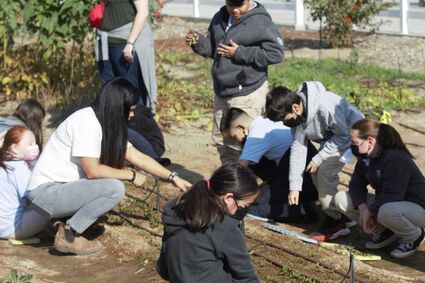 Students hinning out beets, giving them room to grow.

GROW Academy students can now get a firsthand experience of what is involved bringing food to the table with a new edible schoolyard.

According to Principal Brook Webb, edible schoolyards are an important and useful tool in educating students on what is involved in getting food produced and to residents' dinner tables.

Students at Grow Academy - formerly known as Grimmway Academy - participate in every phase of the edible garden, from planting, watering, harvesting, and helping prepare the food for their lunches. "Our children don't just go out and pick a few vegetables, or maybe water the crops, they are involved in every part of the process," said Webb.

The garden contains vegetables such as beets, carrots, cabbage, onions, fennel, and many more varieties. They also grow their own herbs such as rosemary, thyme, sage and cilantro.

The students participate in the program, which goes in five-week rotations, and includes every grade level. Each part of the process is done by the students, giving them duties that are age appropriate.

"The kindergartners might help water the crops and weed, while the first graders pick the vegetables, with the upper grades learning how to slice the produce, and prepare the vegetables, such as sauteing some onions, or peppers," Webb said. 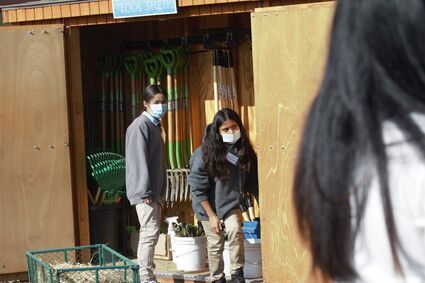 "Another great part of the program is the involvement of the parents and the entire family. We have nights in which a recipe is given out and each family is given the produce necessary for that recipe, then each family prepares that recipe, with the vegetables that their own children had a part in producing," Webb said. "It is great to see the kids' faces as they look at the finished product of their hard work, allowing them to see what they can create and how they can be a part of the agricultural process."

In addition to giving them firsthand experience on how to bring produce to the table, the program also teaches the students how food actually shows up on their tables.

They learn the process, from preparing the soil, tending to the crop while it is growing, to harvesting the produce and preparing it.

"In Shafter, and the surrounding communities, agriculture is a big part of the economy," Webb said. "It is great to be a part of something like this, that makes the kids realize what a big part of the success of our communities is owed to those who work to feed the community."