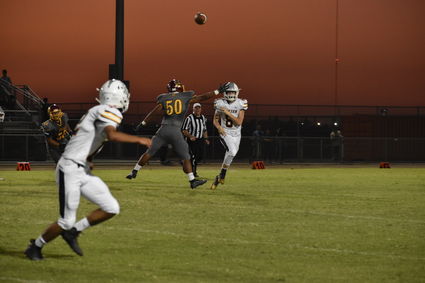 Tyson Dohzier throws a strike to Leo Fernandez for a first down.

The Shafter Generals opened their 2019 campaign with a victory against the Mira Monte Lions 37-22 on Friday night. It was not a pretty win, but it counts the same as a 40-point spread.

Showing opening night jitters, sophomore quarterback Tyson Dohzier and the General offense had trouble getting on track in the first half, with several miscues that stalled promising drives.

In the first minute of the game, Shafter gained big on the first two plays of the game before a fumble gave the Lions the ball in General territory. Two plays later, the Generals were behind for the first time in a regular season game in over a year. With the score 7-0, the Generals couldn't sustain the drive on their next possession, giving the ball back to the Lions. But the Generals defense, creating a pattern that lasted throughout the night, made a statement early when they tackled the Lions' quarterback in the endzone for a safety, cutting the deficit to 7-2. With a short field after the kickoff, the Generals scored their first touchdown of the season when Dozhier took the ball over the goal line to give the Generals a 9-7 lead.

Shafter stretched the lead to 16-7 after the General defense gave the ball back to the offense with a great defensive series, ending with an interception. Shafter wasted no time in scoring, with Nelson Hernandez, who carried the majority of the load in the first half, scored on a 20-yard run.

Mira Monte didn't let the Generals relax as they fought back and scored on a blown coverage on defense by the Generals, one of the few miscues on the defensive end of the ball for the Generals, making the score 16-15.

Each team got one more score before the half, ending the first half with the score 24-22, with the Generals leading.

Joey Sanchez also got on the board with a touchdown, helping the Generals win their first game in a season that will be filled with games played with a big target on their back, as the reigning SSL champs. 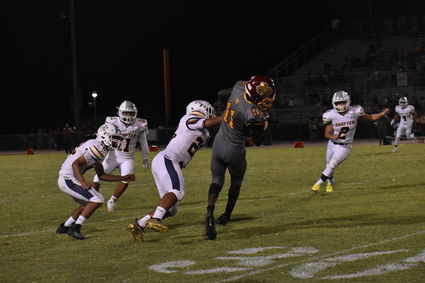 Hernandez stops a Lion back cold after a short gain.

The Generals will get a tougher test Friday night as they host the Highland High Scots. Highland opened the season with a dominating victory over fellow SSL squad Arvin.