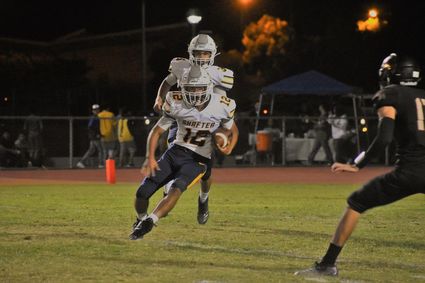 The Shafter Generals dropped their league opener to Cesar Chavez 24-13 on Friday night.

Shafter got behind early when the Titans scored on a 13-yard touchdown pass, making the score 6-0. The Generals ran for a first down in their opening series of the game, but that would be only one of two first downs that the Generals would get in the first half.

Immediately following the first down, Shafter had a run for a loss of two yards, followed by two mishandled snaps from center. Throw in a penalty, and the Generals were faced with a third down and 40 yards to go for the first down..Forced to punt, Shafter gave the Titans the ball in their end of the field.

The Titans took advantage of the great field position and scored on the drive's second play with a 42-yard run up the middle for a touchdown, making the score 12-0.

The Generals were fortunate not to go into the locker room behind by three scores as they fumbled the kickoff return late in the first half.

In the first half, the Generals managed only two first downs and under 100 yards in offense. Sophomore Tyson Dozhier and company hurt themselves with penalties, dropped passes and mishandled snaps.

The second half began much like the first, with the Generals not being able to move the ball. After Shafter's defense forced the Titans into a fourth-down-and-long situation, Chavez faked the punt and the kicker ran the ball 46 yards for a touchdown, making the score 18-0.

The rest of the third quarter saw the teams trade drives, each one not able to score until Dozhier hit Jackson Sanchez for a touchdown, cutting the deficit to 18-7. 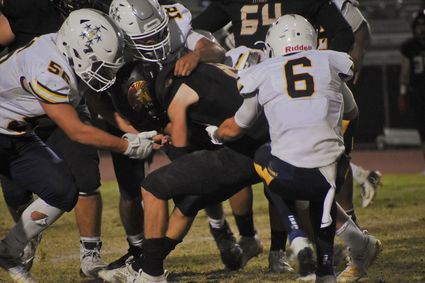 Generals converge on the Titan running back.

Early in the fourth quarter, Dozhier was injured on a play as he ran for a first down. Jackson Sanchez was put in as quarterback, and the game changed. Sanchez got the Generals moving the ball with a few runs, gaining over 10 yards at a clip, and a couple of passes that connected to Leo Fernandez and Chris Lindsey. Shafter got within five points when Sanchez took the ball into the endzone, making the score18-13. The Generals and their fans were fired up, and the entire sideline was reenergized. Unfortunately, the General defense couldn't keep the Titans out of the end zone, as they took the ball and drove it the length of the field, widening the lead to 24-13 and eating up a big chunk of the clock.

The Generals ultimately ran out of time, with the game ending at 24-13. Shafter will be on the road again on Friday night, looking to even their SSL record at 1-1 as they take on the Taft Wildcats at 7:30 p.m.