Brandy Ortega and Alexa Diaz won their weight classes to advance to Nationals.

The club, headed up by Mike Ayon and a staff of volunteers, had five winners in their respective weight classes. The event was held in Compton this past weekend.

The local boxers qualified for the Regionals with victories in the state tournament held earlier in 2019. Alexa Diaz won the Girls 80 lb. division, giving her a chance at a national title. In the Boys 9-10-year-old 50 lb. division, Lorenzo Mendez came away with the championship. Brandy Ortega, boxing in the Girls 85 lb. division, won her weight class, earning her a trip to Kansas.

"Fast Eddie" Rodriguez, with a National title on his resume, has a chance for another one when he dominated his division, being named the Top 13-14-year-old Boxer of the Tournament. Rodriguez went undefeated throughout the tournament, manhandling his opponents on his way to the title.

Javen Encinas, who has won multiple National and Regional titles in his career, was the talk of the tourney after his victory in the 15-16-year-old division. Encinas knocked his opponent out, giving him a match in the final against the No. 1-ranked boxer in the nation, Emilliano Vargas. Vargas has royal bloodlines, being the son of former World Boxing Champion Fernando Vargas. 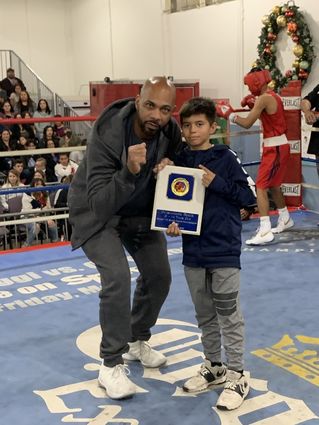 "Fast Eddie" Rodriguez was named the Top 13-14-year-old Boxer of the Tournament.

The tournament crowd was abuzz as the local fighter from Shafter dominated the highly touted boxer and knocked Vargas out of the ranks of the undefeated. This surprising win prompted a text to Ayon from Anthony Saldana of Supreme Boxing. Saldana posted: "I want to give a big shoutout to my buddy Mike Ayon and his fighter Javen Encinas from the Shafter Boxing Club who came out and captured the Western Regional Silver Gloves title with a big win over the highly nationally ranked boxer Emilliano Vargas, son of Fernando Vargas. It is good to see small-town kids doing big things!"

The Shafter Boxing Club has made a habit out of stepping up on the state, regional and national levels of boxing. Starting as a way to help kids get in shape and to give them something to do to keep them off of the streets, Ayon and company have gone from a small group of kids working out in his garage and backyard to one of the elite clubs in California.

Ayon said that he was so proud of his kids and the way they represent Shafter in the boxing world. The success of the Shafter Boxing Club has helped Shafter enjoy notoriety from the elite in the boxing world, proving that the size of the city doesn't matter.

"It doesn't matter if you come from a small town if you have a big heart," Ayon said, with a smile.